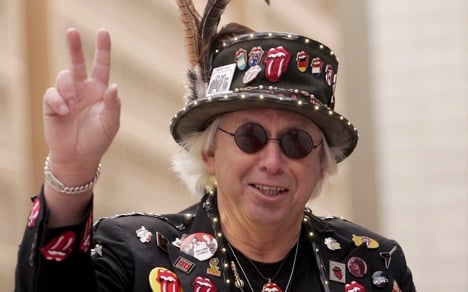 The lounge area on the first floor is decked out in red and black, there is zebra-print on the sofas and leopard-print on the walls. The tongue-and-red-lips logo appears in every imaginable form – as a colourful pissoir, as an emblem on glasses, and on the window panes.

Schröder’s museum, in his home town of Lüchow, contains exhibits stretching back to 1965, when the 61-year-old went to his first Rolling Stones concert in Hamburg. The ticket stub to that concert remains his most treasured item.

An American collector reportedly offered Schröder a million euros for the whole lot, but he turned it down to fulfill his destiny: to run a Stones museum in a converted supermarket in Lower Saxony.

Schröder, who likes to wear a feathered top-hat and blazer studded with hundreds of Stones badges, has been to 159 concerts, and often been invited to hang out with the band backstage.

But his professional life has always been sober. He tells a story that guitarist Ron Wood once asked him whether he would ever consider giving up his day-job (as a banker) for a life of sex, drugs and rock ‘n’ roll. “I said, ‘Not the drugs, but I wouldn’t mind the rest.’ ” Schröder recalls.

He then became Wood’s European curator, organising exhibitions of the rock legend’s paintings.

The town of Lüchow contributed €100,000 to the museum, on condition that the fanatic open his doors at least six days a week between Easter and October every year.