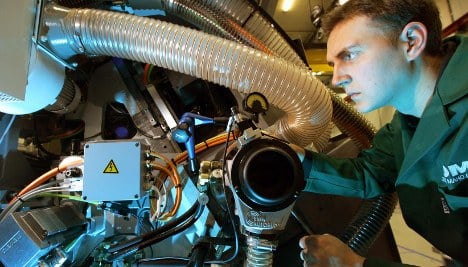 During the depths of Germany’s recession in 2009, Carl Martin Welcker did something the family firm had never done since Welcker’s great-grandfather founded it 131 years ago. He went to the bank for a loan.

Welcker, the fourth-generation managing partner of the Cologne-based firm Alfred H. Schütte, was faced with a drop of up to 90 percent in orders for the machine tools the firm manufactures, which are used in factories around the world.

“At that point in time, it doesn’t matter how healthy you are – you are in a tough situation,” he told The Local. “I went to the bank and said, ‘It doesn’t matter that I never needed help. I do now.’”

At the same time, he made “massive” use of the federal government’s Kurzarbeit scheme, allowing him to reduce his employees’ work hours and in some cases their wages rather than laying them off.

“I went to the guys and said, ‘We’ll go through it together and we are not laying anyone off,’” he said.

That was just two years ago. Last year, Schütte’s sales rose 200 percent and will likely rise even more this year – a stunning turnaround that highlights the rebound of Germany’s economy since it suffered its worst recession since World War II between 2008 and 2009.

“As fast as it went down, it’s gone back up again,” Welcker said.

Schütte is one of what author Hermann Simon, of the consultancy Simon-Kucher & Partners, has famously called the “hidden champions” – the thousands of small- and medium-sized firms that form the backbone of the German economy.

The Mittelstand, as they are called in German, are playing a key role in the torrent of strong economic data coming out of Germany. Last Friday, official figures revealed the economy grew by 1.5 percent in the first quarter of 2011, its largest year-on-year growth since reunification. The country’s economic output has now exceeded the pre-crisis level of early 2008.

Figures released earlier in the week showed that exports had reached €98.3 billion in March, the highest monthly figure since record-keeping began in 1950. Unemployment fell below 3 million for the first time in almost 19 years in late April.

The breakfast of champions

The typical Mittelstand is an unpretentious, quietly successful manufacturing firm run by its owners – often families covering several generations – with a loyal, local workforce that has been trained at the firm through apprenticeships.

More than two thirds are family-owned and based in small cities or rural communities – especially in the Rhineland and Baden-Württemberg. The average age of these firms is 70 years. They employ more than two-thirds of the country’s workers and contribute half of its GDP.

Mittelstand firms such as machine tool-makers suffered heavily during the global recession but also bounced back quickly because their products are what Simon calls “postponable but indispensable.” They sell things that businesses absolutely need but rarely need right away.

“The strength of the growth is probably temporary – we won’t have a new export record every month as we did in March,” he said. “But the long-term prospects are quite good to very good.”

The Mittelstand have inherent strengths, many experts say. Management consultant and author Bernd Venohr told a recent conference in Vienna that they focus on long-term survival and consider themselves part of their local communities, which commands the loyalty of their workers and their suppliers.

The owner-managers consider themselves stewards of a firm they will pass onto the next generation rather than flashy CEOs.

“The culture was helpful to survive the crisis,” Venohr told The Local this week. “The Mittelstand behaved counter-cyclically: they tried to keep qualified staff, invested in research and development and sales, whereas many publicly listed companies with short-term performance pressures laid off people.”

Having avoided firing people in 2009, firms like Schütte still had their fully trained workforces when the economic climate improved, which helped them bounce back faster.

“Germany still has a strong industrial base, other than say Great Britain or the United States,” Welcker said. “There were also smart – and lucky – decisions by politicians and entrepreneurs, (such as) Kurzarbeit.”

He said this allowed companies like his to keep the employees on board and prepare for a bigger and better future instead of just shrinking towards oblivion.

Indeed, Welcker never ended up having to draw on the line of bank credit he eventually secured for his firm. Things picked up before he needed it.

“China may be the world’s factory, but Germany companies are building it,” Venohr said.

Indeed China overall is a major factor in the current boom, presenting both a massive opportunity but also a longer-term challenge to German manufacturers, experts say.

For now, it is sucking up German exports, especially for the automotive industry.

“We are doing a lot of forecasting work and we always tell our companies that it’s not a question of whether, but how much, the demand is shifting to Asia,” said Gerhard Hein, the director of economics and statistics with the German Machine Tool Builders’ Association.

“Take China for example: the demand is one third of the entire order intake from abroad in the case of German machine tools. This portion will increase and … in say 2013 or 2014 we will see 60 or even 65 percent of worldwide machine tool demand coming from Asia. This is the big challenge.”

German Mittelstand firms have been flexible enough to adjust well to the new demand from the Far East, Hein said. But he and others agree that the looming issue is that China won’t be satisfied to remain a second-rate manufacturer itself.

“The Chinese are always clever enough that they never buy a mere machine. They always ask for know-how, process support, training of the workforce and other after-sales services,” Hein said.

It won’t be long before China is a competitor as well as a customer.

“China is the most serious competitor to the Mittelstand,” Hermann Simon said. “They are saying, ‘We want to be world class. We are determined to become world class.’”

Until then, commentators agree that the next few years should be a healthy time for the hidden champions.

“I’m quite confident we are at the beginning of an upswing that should reach for three or four years,” said Gerhard Hein. “We will see a strong jump in production in 2011 and also a prosperous 2012 for the Mittelstand.”

Bernd Venohr agreed China would become a “formidable competitor” and said speed bumps such as a possible burst of China’s real estate bubble could spring up but added, “mid-term, I am optimistic.”