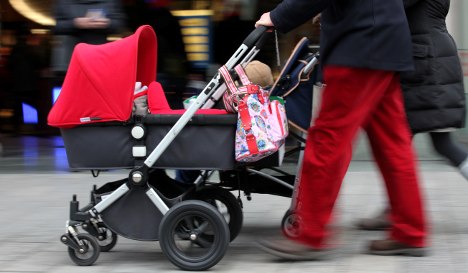 The party’s new policy push, which kicked off by electing Economy Minister Philipp Rösler as FDP chairman last weekend, is likely to put it on a collision course with the Christian Social Union (CSU). The FDP is the junior coalition partner to Chancellor Angela Merkel’s conservative Christian Democrats (CDU) and their Bavarian CSU allies.

The chairwoman of the family committee of the Bundestag, Sibylle Laurischk, a member of the FDP, told the Saarbrücker Zeitung’s Tuesday edition that a basic child income “would replace parenting payment, child payment, tax benefits for married couples along with other children’s allowances.”

With a basic income, every child would be entitled to a definite amount of money.

“Parents and above all single parents who don’t have their own income can therefore pay for what a child needs,” she said.

Laurischk declined to name a figure for the income.

The CSU, which is the Bavarian sister party of Merkel’s CDU, has in the past clashed noisily with the FDP on such issues and has already rejected the new call for changes.

The family policy spokeswoman of the conservatives’ parliamentary group, the CSU’s Dorothee Bär, told broadcaster Deutschlandfunk on Tuesday morning that the existing parenting payment or Elterngeld was a successful model and rejected calls to change it.

On Sunday afternoon, wrapping up the FDP’s conference, the party’s general secretary, Christian Lindner, said the popular Elterngeld should be abolished and the €4 billion saved should be spent on things such as child care centre places.

Laurischk followed this up on Tuesday, saying Elterngeld did not solve the problem of improving children’s progress according to their abilities. It was “social benefit financed from tax money that has nothing to do with need and makes up a large item in the federal budget,” she said.

Elterngeld is calculated on the parents’ income and therefore can be especially lucrative for well-paid professionals.

Even the Erziehungsgeld child payment for children born before December 31 2006 – and which was means tested – had the advantage that it mainly benefited “those who needed it,” Laurischk said.