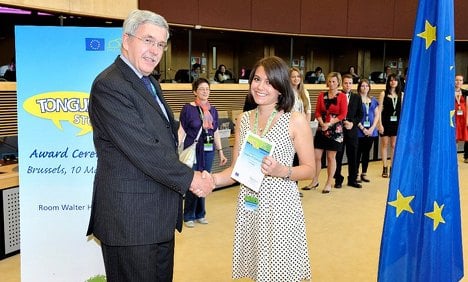 Vanessa De Carvalho might just be a textbook example of globalization in action. The 24-year-old grew up in Canada, but her father hails from Portugal and she has Italian citizenship through her mother’s grandparents.

She already speaks four languages and has been working on a fifth – German – since moving to Berlin to work as a schoolteacher at a bilingual school about two years ago.

If that’s not enough, De Carvalho has now been honoured by the European Union for her fascination with languages.

She was one of 28 people from around the continent invited to Brussels last week as the winners in the European Union’s inaugural “Tongue Stories” competition. The Local was invited along as a guest of the EU to report on the event.

Packed full of Brussels pomp, it was the culmination of a several months-long competition meant to highlight Europe’s language diversity.

It was also, perhaps, a sort of validation for De Carvalho, who has experienced what many foreigners do here – trouble learning German.

“It was scary at first,” she said. “The hardest thing for me was not being able to understand at all.”

A round of online voting determined who from each country got the trip to Brussels. Then a panel of judges picked three continental champions, who would be awarded iPads at the European Commission in Brussels.

De Carvalho’s essay was about her struggles moving to Germany two years ago without knowing the language.

The story is one that many foreigners could empathize with.

“The hardest part of the first day of school wasn’t that the students looked at me with pure confusion, it was realizing that I couldn’t understand my class clown when everyone but me would laugh every time she spoke,” De Carvalho wrote in her essay.

In Brussels, De Carvalho recounted how she had to bring a picture book to the grocery store so she could show workers the kind of food she wanted to buy.

She remembered how annoying it was that she couldn’t talk to her neighbours, long-time Berlin residents, who she knew had interesting stories about the city’s Cold War division.

“It was incredibly frustrating,” she said.

But ultimately, her story, however, became one of success.

She took language classes to improve her grammar skills, spent nights finding the right words in dictionaries and is now proud of her German.

De Carvalho could eventually understand what the class clown was saying. She was also able to finally meet with her neighbours. And yes, they did have some neat memories from before the Wall fell.

“I would tell people to just come here, just learn it,” she said. “Take the plunge.”

In Brussels, De Carvalho felt the knots in her stomach as she waited to find out whether she was one of the big winners – which she unfortunately wasn’t.

But after picking up a certificate and small trophy, De Carvalho said just having learned German has made her feel like a winner every day.

“We all speak different languages, but if we spend time to learn a little bit about each other, we can still communicate,” she said.