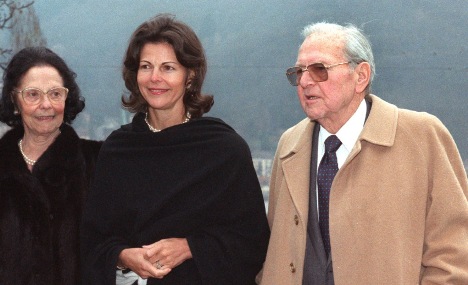 “The queen, along with the Sommerlath family, has taken the initiative to gather the facts concerning the activities of Walter Sommerlath in Brazil and Germany between 1930 and 1940,” the royal court said in a statement.

“The inquiry has already lasted several months but it has not been established when the results will be made available,” said the palace, adding that it would likely be autumn.

Revelations and accusations regarding the past of Walter Sommerlath, who died in 1990, have regularly made the headlines in Sweden recent years.

The queen, 67, has said until now that, although her father was a member of the Nazi party, he was not politically active and was forced to comply as others were to save his career.

Sunday’s announcement follows an investigation by the commercial TV station TV4 last year which said that he took over a German factory belonging to a Jew in 1939 as part of an “Aryanisation” programme.

Sommerlath left Germany for Brazil in 1919, aged 18, where he met and married the queen’s Brazilian mother Alice.

A member of the Nazi party from 1934, he worked for a local branch of a German steel company before returning to his home country in 1938 with his wife and two children.

In 1939 he began managing a factory employed in the war effort until its destruction five years later.

It was during their time in Germany that the couple had a further two children, including Silvia. The family returned to Brazil in 1947.

Silvia Sommerlath met the future king of Sweden, Carl XVI Gustaf, at the 1972 Munich Olympics, where she was working as an interpreter.

When she married in 1976, Walter Sommerlath denied having been a member of

the Nazi party but it was confirmed by press reports in 2002.