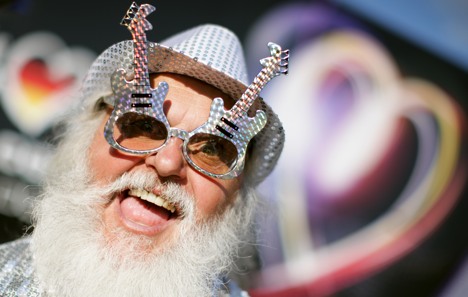 The contestants will be watched by 35,000 people inside the western German city’s sports stadium and tens of millions of people live on television in Europe and beyond.

“It’s great – the atmosphere, the kitsch, the whole thing. It’s a big party,” fan Els Mahieu, 34, who has travelled from Belgium clutching her €89 ($126) stadium ticket for the show, told AFP.

“I’ve been watching (Eurovision) since I was small,” said Jean-Pierre Perez, one of a group of 130 diehard French fans to have made the trip to Düsseldorf hoping to see their candidate win. “I think this year is the one.”

Europeans have few reasons for cheer at the moment, but this evening they will put their feet up, turn on the television and let their hair down for Eurovision, as they have done for decades. This is the 56th contest.

Often cringe-worthy but always watchable, the contest is a cherished institution, with 43 nations competing, then whittled down to 25 for the grand final.

“It’s amazing. This competition brings Europe together and brings countries together. This is what I went into music for,” said Lee Ryan, 27, a member of this year’s British entry, newly reformed boy band Blue.

“It’s a big holiday, a big holiday for everyone in Europe, with such great singers and beautiful songs. The Eurovision is unique,” Ukraine’s Mika Newton, 25, hoping to secure her country’s second victory, told news agency AFP.

Despite Europe’s linguistic diversity, most acts perform in English, providing 22 winners over the years. French songs have won 14 times, Dutch and Hebrew songs three times each. Norway’s 2011 entry is partly in Swahili.

This year, the song tipped as the favourite is in Corsican – for only the second time in Eurovision history – with Amaury Vassili, 21, hoping to end more than 30 years of French failure at Eurovision.

“The language is very close to Italian,” the tenor told AFP. “There is the same fluidity for singing. And it has a romantic side that is very like Italian.”

But he faces some tough competition, not least from spiky-haired Irish twins Jedward and their song “Lipstick”, Azerbaijan’s duo of Ell and Nikki, Britain’s Blue and Estonia’s Getter Jaani, a winner of the “Estonia’s Got Talent” TV show.

A number from Zdob si Zbub, a difficult-to-pronounce group of lively Moldovans in “cosmic” pointy hats is also a strong contender, as are songs by Sjonni’s Friends from Iceland and from Italian crooner Raphael Gualazzi.

But Germany’s teen sensation Lena Meyer-Landrut could write history as the 19-year-old tries to become the first ever person to win two Eurovisions in a row, although “Taken by a Stranger” lacks the catchiness of 2010’s winning “Satellite.”

The TV show, one of the world’s longest-running, is now broadcast not only in Europe, but also in Australia, Canada, Egypt, Hong Kong, India, Jordan, Korea, New Zealand and the United States, even though they do not participate.

Viewers at home and juries from each of the countries vote for their favourite song.

The country of the winner, announced at around midnight, gets to host the competition the following year, which is why the 2011 contest is in Germany.

“It’s not serious. It’s happy, you know. I think we have to enjoy it,” Germany’s Lena said.

“Maybe the rest of the world can watch it and do something like we do, can do a Worldvision. All countries just having fun.”