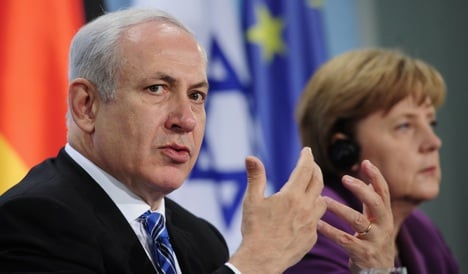 “Prime Minister Netanyahu and Chancellor Merkel … discussed the practical relations between Israel and the Palestinian Authority,” a statement from Netanyahu’s office said of the telephone conversation.

Last week, Netanyahu visited London and Paris in an effort to convince the British and French leaders not to support an expected Palestinian bid for United Nations endorsement of a unilateral declaration of statehood.

Merkel has already stated her opposition to such a move and has said she will not support a motion to that effect if it goes before the UN General Assembly in September.

As Netanyahu was holding talks with French President Nicolas Sarkozy in Paris last Thursday, Merkel met Palestinian president Mahmud Abbas in Berlin. Netanayhu’s office said she briefed the Israeli premier on that meeting in their Friday phone conversation, but did not elaborate.

Next Friday Netanyahu is to meet US President Barack Obama at the White House and will address both houses of Congress on May 24.

“Chancellor Merkel said that she looked forward to and appreciated the significance of the visit to Washington of Prime Minister Netanyahu next week and the speech to Congress the following week,” the statement said.