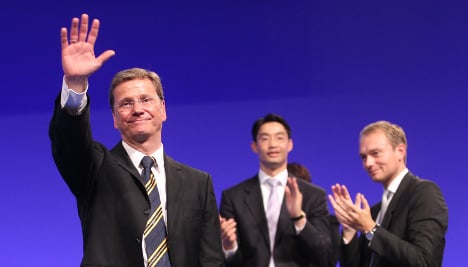 In a defiant farewell speech as leader of the embattled pro-business FDP, Westerwelle admitted he had made mistakes but insisted he did more good than harm.

Westerwelle was forced to step down as party chairman, a job he had held for 10 years, in the wake of foundering support and several state election disasters.

His successor, Philipp Rösler, who this week switched from the job of health minister to the higher profile economy minister in Chancellor Angela Merkel’s cabinet, was due to be formally elected FDP leader on Friday afternoon.

At the start of the FDP’s three-day conference in Rostock, Westerwelle sought to disarm his critics with a frank and self-critical, but nevertheless optimistic, assessment of his leadership.

Speaking to more than 600 delegates in Rostock, he said: “I admit each mistake and I apologise for each mistake.”

And in a remark that reveals just how grim things have become for the party, Westerwelle added that, “the last 10 years were on balance absolutely positive. We did more right than wrong.”

He was given a seven-minute standing ovation.

Rösler in turn effectively declared his support for Westerwelle to continue as foreign minister.

“The real gift that we owe you, is respect for your achievements, your person and your office as foreign minister,” he said.

The new leaders of the party hope to avoid an open fight over Westerwelle’s position. After meeting with the new leader of the parliamentary group, Rainer Brüderle, his deputy Martin Lindner agreed to abandon a proposal for a free vote on whether Westerwelle should remain foreign minister.

Nevertheless, tensions remained apparent within the delegation about Westerwelle’s cabinet role. Many members believe that keeping such a high-profile job in the hands of such an obviously unpopular politician will only further damage the party.

A poll published on Friday by broadcaster ARD found that 86 percent of Germans felt the party was more occupied with itself than with the nation’s affairs. Some 61 percent felt that dependable policies were no longer possible under the FDP and only one third believed they were on the right track under the new leadership of Rösler.

“I will not grab the steering wheel from my successor,” he said.