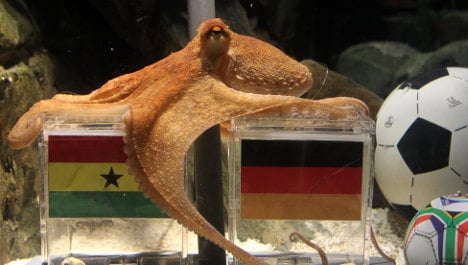 The soothsaying sea-critter was a born movie star, according to Alexandre O. Philippe, the director of the new documentary, ”The Life and Times of Paul the Octopus.”

“Paul’s is a true under-dog story – or under-octopus story, I guess I should say,” Philippe told The Local this week. “The sheer impossibility of his predictions, the sheer absurdity of it, is something I think people flock to and embrace.”

Paul became a household name during last summer’s World Cup, when, using novel methods, he correctly predicted the winner of eight consecutive games – against odds of 256 to 1.

Before each match, Paul was presented with two boxes, each containing his favourite food, mussels. The boxes were printed with the respective flags of two opposing teams, and Paul would “pick” the winner by choosing a mussel from one box.

That’s where the story gets fishy. Were Paul’s prophetic powers real, or was this just a hungry octopus getting a lucky draw?

“A psychic octopus sounds ridiculous, sure,” Philippe said. “But when you talk to statisticians and other experts like we did, Paul’s achievement is actually quite remarkable. It’s a head scratcher.”

One quirk taken up by the film, sure to delight numerologists the world over, is the meaning of the number “eight.” Paul had eight tentacles, picked eight games correctly, and the champion, Spain, scored a total of eight goals in the tournament. Coincidence?

“I spent about four days observing Paul while he was alive,” Philippe said, “and when he looks at you, you just can’t help but wonder: is there more in that head than we can see?”

Paul’s prescience made him a hero to some football fans, a nuisance to others, but his ability to please a crowd was undeniable.

By the end of the tournament, his owners at the Oberhausen Sea Life Centre had received so many requests from across the world that they were forced to hire an agent to manage his affairs.

One offer, among countless others that were rejected, was from a wealthy Russian who wanted to buy Paul for upwards of $300,000. But Philippe’s film pitch was one the aquarium could not pass up.

Ultimately, ”The Life and Times of Paul the Octupus” does not take a definitive stance on the veracity of his clairvoyance. But Philippe devised a novel hypothesis to explain the uncanny twists of fate.

“Maybe it isn’t that Paul’s picks were automatically correct,” Philippe wondered. “But maybe people simply believed in him so much that he actually affected the outcome of the games.”

Philippe related the story of two Spanish players, who said their coach had forbidden them to watch Paul’s prediction for the final against the Netherlands.

But they snuck a look at Paul’s pick before the game and, and lo and behold, they won.

“You have to believe that it affected their psyche, their belief in their ability to win,” Philippe said.

The film is unlikely to set any of these issues to rest. Indeed, it is apt to generate another flood of speculation.

“There’s a lot about Paul that makes him so puzzling and spooky,” Philippe said. “It almost seems like it was meant to be. “But the great thing, I think, is that we’ll never know.”

‘The Life and Times of Paul the Octopus’ is scheduled for release in late 2011/early 2012.