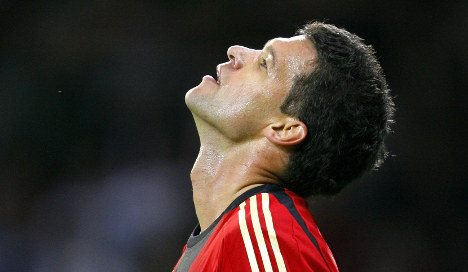 The 34-year-old has not now played for Germany since March 2010 after suffering back-to-back injuries last year, and he has struggled to get a regular place in the Bayer Leverkusen team since making his return in January.

He has been left out of the Germany squad to face Uruguay on May 29 in Sinsheim before the Group A leaders take on Austria, on June 3, and Azerbaijan, on June 7, in Vienna and Baku respectively, in Euro 2012 qualifiers.

“Michael has not been nominated for the next three internationals,” confirmed coach Joachim Löw in a statement. “The decision has been discussed with him.

“In the past few weeks, we have been in constant contact and we met in person at the end of March.”

According to reports in the German media, ex-captain Ballack is set to win his 99th – and final – cap against Brazil in a friendly in Stuttgart on August 10, which would double as his farewell.

In his absence, Ballack’s Leverkusen team-mate Simon Rolfes is back in the squad after more than 18 months away from international football following a knee injury.

Löw has called up 21-year-old midfielder Marco Reus from Borussia Mönchengladbach while Real Madrid’s Sami Khedira has been included despite picking up a leg injury.

“Marco has been developing well and is a good prospect,” said Löw.

“In recent weeks he has played very well in the Bundesliga and has been extremely dangerous.”

The friendly against the South Americans at the end of the month will be a rematch of the third place play-off at the 2010 World Cup in South Africa, which the Germans won 3-2.

Having won all five of their Euro 2012 qualifiers, Germany are five points clear at the top of Group A and on course to qualify for the four-week long tournament to be held in Poland and the Ukraine in June 2012.