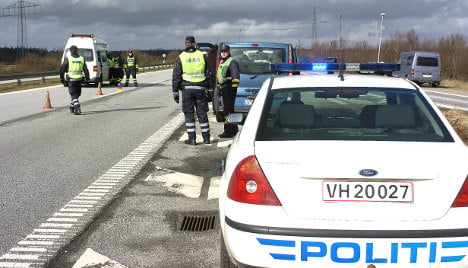 File photo of Danish police at the border with Germany. Photo: DPA

In response to pressure from a populist right-wing party, the Danish government has announced it would place customs booths at border crossings with Germany and Sweden, a move it says is necessary to tackle cross-border crime such as drug trafficking. The changes are expected to be implemented in the next few weeks.

On Thursday, Denmark dismissed claims the move breached the Schengen agreement, a cornerstone of European co-operation that allows people to move without passport checks between 25 European countries, 22 of which are EU states. It insisted it was not reintroducing passport checks but just customs inspections.

“I see a lot of drama in the European press but I am going to state things like they are,” Pind told reporters, insisting that Europe’s Schengen open borders agreement permitted such actions.

“I think that when this model is studied carefully, everyone will see that it is, if I may quote Shakespeare, much ado about nothing,” he said.

He stressed that Danish authorities were deployed as customs agents, not border police, and that their job will be to scan vehicles for any criminal activities. “This has nothing to do with personal passport controls,” he said.

But German politicians have reacted angrily to the unilateral Danish action.

“We see the need for a quick and detailed explanation of this matter,” Foreign Minister Guido Westerwelle said in a statement.

“Freedom of movement and the Schengen agreement are essential achievements of European unity and must not be put in doubt.”

Friedrich told broadcaster ARD on Thursday morning that Schengen member states needed to be able to control their borders in emergency situations.

“But we mean to limit that very strictly,” he said.

Justice Minister Leutheusser-Schnarrenberger told broadcaster Deutschlandfunk that the reimposition of permanent border controls would remove “an achievement of the European Union.”

Denmark’s actions showed how fragile the regulations and core values of the EU could be, she said. It was vital therefore to have a debate about the great significance of freedom of movement and open borders.

“I expect the government to make it clear to our Danish neighbours that the reintroduction of permanent barriers is not acceptable,” he told business daily Handelsblatt.

Better control at the exterior borders of the Schengen zone itself were more important than “random controls between the Schengen member countries,” he said.