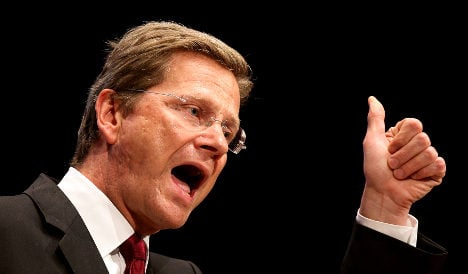 “The sanctions decided (by the EU) are a first step. If Damascus continues its crackdown, we will step up the pressure and we will tighten the sanctions,” he said in a statement.

The EU published a list of 13 Syrian officials, including the younger brother of Syrian President Bashar al-Assad, subject to sanctions for their involvement in repression.

Maher al-Assad, 43, head of the Republican Guard, was described as the prime mover of the crackdown on anti-government protestors.

The names of the officials hit by visa bans and assets freezes were published on Tuesday morning after the EU formally adopted the sanctions on Monday to punish the regime for a crackdown that human rights groups say has left hundreds dead.

The EU also imposed an arms embargo and a ban on the import of equipment that could be used for internal repression.

The sanctions were designed to bring about an immediate change of policy by the Syrian leadership, an end to violence and the swift introduction of, “genuine and comprehensive political reform,” EU foreign policy chief Catherine Ashton

“These sanctions are an unmistakable signal from Europe to Syrian leaders that they must immediately stop their brutal attacks on demonstrators and the abusive jailing of opponents,” Westerwelle said on Tuesday.

Diplomatic sources said the Syrian president was spared for now due to divisions within the EU over whether it was appropriate to target him.