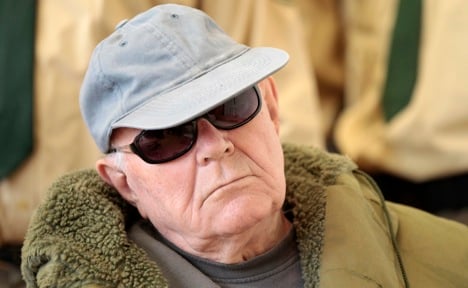 Sixty-eight years after the events, the verdict on whether Demjanjuk is guilty of helping to murder 27,900 Jews at the Sobibor extermination camp, in occupied Poland, could come as early as Thursday.

The high-profile trial, which opened 18 months ago in Munich, has been billed as one of the last to involve an alleged Nazi war criminal, and has led to much soul-searching on the subject of delayed justice.

The fact that the accused was a Ukrainian-born prisoner-of-war facing justice at the hands of the nation behind the Holocaust has also raised questions.

His lawyer Ulrich Busch, described him as “a victim of Germany’s justice system,” when calling last week for his acquittal, and said he would seek compensation for his client.

Serge Klarsfeld, the French lawyer and Nazi hunter, expressed frustration with the trial, saying it failed to provide new details about the case and could not prove Demjanjuk’s direct participation in the killings.

“The witnesses are all dead and there are no documents because he was only a small fish,” Klarsfeld told AFP. A guilty verdict “would open the door to accusations of unfair justice,” he added.

If acquitted, Demjanjuk could be extradited to Spain, where prosecutors have prepared a separate case against him.

German prosecutors have called for a six-year jail term for the former Red Army soldier who denied all charges but volunteered little information about his time as a prisoner-of-war of the Germans after 1942.

Demjanjuk kept silent throughout the trial, sitting in a wheelchair or lying on a stretcher, his eyes shielded behind dark glasses. His health was often a cause of concern during the trial, leading to frequent delays.

He emigrated after the war to the United States where he worked as a mechanic. But he then faced trial in Israel in the 1980s on charges of serving as a guard in another death camp – Treblinka – where he was allegedly known as “Ivan the Terrible.”

He was found guilty and sentenced to death, but the Israeli supreme court overturned the verdict on the grounds it could not be proven he was indeed the same sadistic Ukrainian guard.

Demjanjuk spent nearly eight years in an Israeli jail, five of them on death row. He was then detained for 10 months in the United States before his expulsion to Germany, and has spent the past two years in a Munich jail.

Much of the case in Germany had turned on whether Demjanjuk, who is now stateless after having been stripped of his US citizenship for lying about his past, did indeed work at the Sobibor death camp.

Prosecutors have argued that if he was a guard there, he is by definition guilty of helping to kill 27,900 Jews at the camp during the six-month period he allegedly worked there in 1943.

Much of their case rides on whether an identity card – number 1393 – made out by the SS to one Ivan Demjanjuk who was trained to become a prison guard and sent to Sobibor, is genuine and belonged to the accused. Defence lawyer Busch insists it was fake and no witnesses could place him there.

Although Demjanjuk could face up to 15 years in prison, prosecution lawyers have called for him to serve just six years on the grounds of his age and time already imprisoned.

They also made plain that he did not volunteer to work in a death camp, and only served there in a junior capacity.

Michael Koch, an attorney for the co-plaintiffs – relatives of those killed at the camp – regretted his silence, saying it had probably accounted for the trial’s sporadic media coverage.

“Demjanjuk just made himself look like a piece of furniture,” he said.

The accused appeared to sleep through parts of the proceedings, “but in fact his eyes were wide open and he watched everything,” Koch said.

Cornelius Nestler, another lawyer for the co-plaintiffs, said Germany had been duty-bound to prosecute Demjanjuk even though the crimes were committed many years ago.

“The judicial system and society do not have the right to ignore the facts, saying we just don’t want to look at this any more, as used to be the case in the 1950s and 1960s when much of society and much of the justice system felt this way,” he told the court.