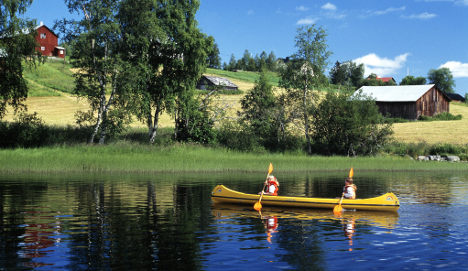 A file photo of a lake in Dalsland. Photo: DPA

The accident took place on Havdetjärnet Lake, west of the village of Köpmannebro in the province of Dalsland, when two men from Germany fell from their boat into the water.

“One of the men got a cramp and stood up and fell into the lake and the other man fell in the lake as well,” Västra Götland County police spokesperson Björ Blixter told the Aftonbladet newspaper.

Two women accompanying the men, both of whom were also from Germany, heard screams for help and called emergency services around 10:20 am.

But the visiting Germans had a hard time explaining to operators exactly where they were, and it took more than on hour for rescue workers to arrive on the scene.

While one of the men made it back to shore, the other man, reported to be in his fifties or sixties by regional paper Nya Wermlands Tidning, was eventually picked up by rescue workers and later pronounced dead at Dalsland hospital.

“Time is important in circumstances like these, but there’s no guarantee that we could have saved the man even if we’d found the spot right away,” said Blixter.

The man who made it to shore and the two women were in a state of shock following the accident and have been offered counselling support by local authorities.