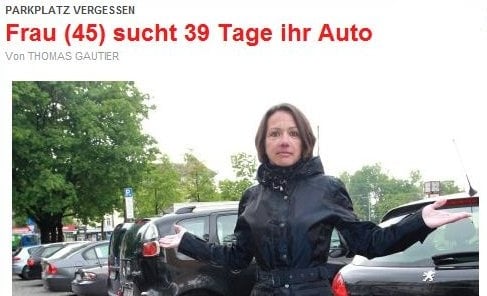 The Express tabloid reported this week that Susanne W., aged 45, lost the vehicle with a retail value of €50,000 on her way to see a show in the Bavarian capital with her daughter on March 27.

She told the paper she “didn’t know her way around so well” in Munich, so she followed a friend to guide her to the best parking spot ahead of the concert. However, after being distracted by chatting with her 11-year-old daughter, she then followed the wrong car into what turned out to be a private garage.

“It was only one floor below ground and I parked quite close to the exit in a spot that didn’t have a number,” explained Susanne W.

But after going to the other car expecting to find her friend she discovered “there was someone else inside,” sparking her to go for a stroll with her daughter after realizing they’d be too late for the show.

A few hours later, however, Susanne W. was unable to track down her Audi. Eventually they were forced to take a taxi for the 42 kilometre journey back home to the town of Tutzing.

Susanne W. then made several return trips to Munich to search for her car, even knocking on doors on the street where she thought the garage was located.

“The Audi wasn’t towed because otherwise the police or a towing company would have called,” she told Express.

After failing to have any luck with the police, she hung posters in the windows of local shops and restaurants offering a €100 reward. But the money remaining unclaimed and it looked as the car would be lost forever.

Only after mentioning her 39-day comic ordeal to a Munich newspaper did city resident Claus Piller call her to say he had found her car in his private parking spot.