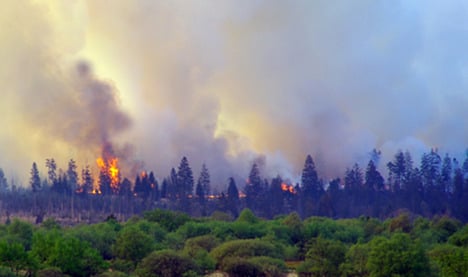 Two firefighters were slightly hurt, though no tourists were injured in the blaze, despite the reserve being packed with visitors over the Easter weekend, Leo Schlembach, head of Malmedy’s forestry directorate in Belgium told The Local on Wednesday.

The fire destroyed up to 1,000 hectares (2,471 acres) of pristine land on the Belgian side of the Hohes Venn-Eifel nature reserve near Aachen on Monday and Tuesday.

More than 300 German and Belgian firefighters fought the fire, which at one point was so fierce that they had to evacuate the headquarters they had set up at a local restaurant.

Fears that the fire could grow massively and spread to the German side or even beyond the park’s boundaries were not realised. The firefighters had all but extinguished the fire by Wednesday, Schlembach said.

“The fire is pretty much over. There are still officials there but we’re just in clean-up mode now,” he said.

It’s unclear how the fire – the region’s largest in 60 years – started on Monday, but it ended up burning about a fifth of the park. Police were on the scene investigating while the fire brigade extinguished the last small flames, Schlembach said.

“They will examine the situation and discover how this happened,” he said.

The fire’s ultimate effect on wildlife will not be known for some time, but officials emphasized its resiliency this week. The park is known for its hiking trails and leafy trees.

Forestry official René Dahmen said the preserve has sustained a “black eye.” But, he added, nature will recover quickly.