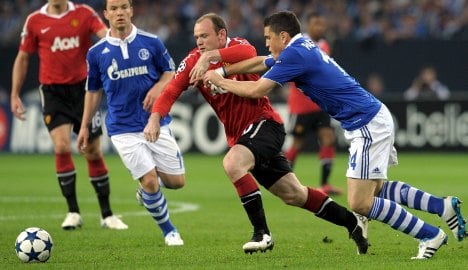 The result puts Sir Alex Ferguson’s side firmly in the driving seat ahead of next week’s return leg at Old Trafford, when they will seek to book their place in the Champions League final for the third time in four seasons.

“It was a very professional performance tonight,” said Ferguson. “The concentration, intensity and passing were all top class. They have all done fantastically well.”

Rooney believes his team could have scored more.

“We’re delighted but a bit disappointed in terms of not scoring more,” he said. “We have done very well. We have to be professional for the second leg as Schalke can’t be taken lightly. They went to Inter and won 5-2 (in the first leg of their quarter-final).”

Giggs was always confident of victory.

“I thought if we kept creating chances then they would go in,” said the Welshman who, at 37, became the oldest player to score a Champions League goal.

“We could have been four or five up at half-time. Before the match we would have taken 2-0 but it’s quite disappointing in terms of the final result now.”

Schalke defender Christoph Metzelder admitted his side were outplayed.

“We have to recognise that we were dominated by a team playing in a different dimension,” he said. “We still have hope, anything is possible.

We’ll try and do everything to win at Old Trafford.”

Schalke upset defending champions Inter Milan in the previous round but the visitors’ onslaught meant they were unable to cause Edwin van der Sar any real problems as the United goalkeeper kept his 50th clean sheet in the competition.

Neuer has been the subject of intense speculation since he announced he was not going to extend his contract but the Schalke captain demonstrated why he is so highly sought after with a string of world-class stops in the first half.

The first, on three minutes, saw him brilliantly palm away a Rooney curler, before he plunged to his right to keep out a low Park Ji-Sung drive two minutes later.

United’s best early chance fell to Javier Hernandez but, having beaten the offside trap from Park’s pass, the Mexican international found his route to goal blocked by the imposing frame of the Germany number one.

Hernandez ruffled the side netting and flashed a shot across the face of goal before a stunning one-handed stop from Neuer prevented Giggs heading United in front.

It seemed only a matter of time before semi-final debutantes Schalke buckled and Atsuto Uchida had to produce a tremendous block to deny Park after Neuer’s save from Hernandez left the Korean with an open goal.

Neuer was at it again seconds from half-time, boldly racing from his line to deny Giggs, after Schalke had seen a penalty appeal rejected when Antonio Valencia nudged Alexander Baumjohann in the back beneath a high ball.

A Rooney header from a Giggs free-kick prompted more acrobatics from Neuer early in the second half, while Giggs should have done better than blaze wide moments later after flummoxing three defenders with a cunning feint.

A rare sight of goal at the other end saw Jose Manuel Jurado slice a volley wide, before the breakthrough that United’s first-half dominance merited finally materialised in the 67th minute.

Rooney bought himself space on the edge of the box by shaping to shoot and as the Schalke defence advanced to close him down, he slipped a pass through for Giggs to roll the ball between Neuer’s legs.

The deadlock finally broken, United required just two minutes to stretch their lead. Hernandez drove infield from the right flank before stabbing the ball to Rooney, who beat the exposed Neuer with a first-time shot into the bottom-left corner.

Victory could even have been more handsome, had Patrice Evra’s low shot two minutes from time not whistled narrowly wide of the right-hand upright.