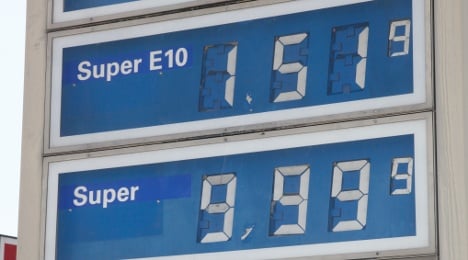 In the town of Filderstadt, south of the Baden-Württemberg capital, the Esso petrol station apparently raised the price to a prohibitive level in a deliberate attempt to dissuade motorists from buying it, police reported. The station was running low on the fuel amid a nationwide shortage.

Nevertheless, several customers still used the pump, despite the fact that it actually carried a warning sign against filling up with super. They were then taken by complete surprise when they got to the cash register.

“I didn’t pay attention to the price. Who expects something like that? Nearly €10 for one litre? It’s a swindle,” he said.

He called the police but was told he needed to pay, otherwise the Esso station would make a complaint.

One woman from Filderstadt was asked to pay just under €200 for 20 litres. Another customer filled up with 10 litres. Both also refused to pay and instead called the police.

The Esso attendant had done nothing wrong, police said, because he had no say in the fuel price.

“The price was determined by the head office,” a police spokesman said.

The customers eventually paid for their petrol and were hoping to sort out a compromise with Esso on Tuesday. Nobody from the station was prepared to comment on Monday afternoon.

“It’s barely believable that global companies blunder into a supply bottleneck like drunks into a village pond,” he said. “The relevant inspectorate has to investigate. That goes also for unfair price rises and exorbitant prices at the pump.”

About one in five petrol stations in and around Stuttgart had run dry of super on Monday afternoon. There was a choke on fuel supplies across the country because of the combination of Easter traffic, the holiday ban on fuel tankers, and logistical problems for petrol companies associated with the introduction of the E10 ethanol fuel.

But it had not been as bad as expected, according to Shell spokeswoman Cornelia Wolber.

“The situation is for nowhere near as bad as feared,” she said.