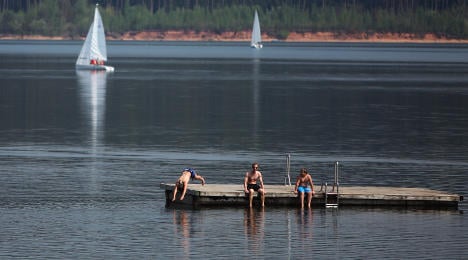 A two-and-a-half year old boy was lost when the inflatable boat he was in was caught by a strong current and capsized on the Werra River, on Saturday morning.

The boy had been taken on the boat by a friend of his parents who were holidaying with him in Hann, Thuringia. A 52-year-old man swam after the boy to try to catch him, but could not catch him up and was himself rescued from the water.

A search and rescue operation was launched involving around 120 people from police, fire brigades and various volunteer rescue associations.

They worked through Saturday, and brought in divers on Sunday to search the river for at least four kilometres from the site of the accident. But the search was called off on Sunday without a result.

“We must sadly assume that the child drowned,” a police spokesman said.

It is now being checked to see whether criminal charges should be brought against the man who was with the boy as neither he nor the child was wearing life vests.

He is currently in a psychiatric clinic, having suffered severe shock. The 39-year-old mother and 43-year-old father of the boy are being offered counselling.

A 30-year-old man drowned on Good Friday while paddling on an inflatable boat on the Anglberger Lake in Upper Bavaria. Passersby saw him fall in the water and go under. Rescuers found him an hour later and started reanimation attempts, but he died shortly afterwards in hospital.

In Munich, a 20-year-old man is also thought to have drowned on Friday after jumping into to the Isar Canal while drunk. A large search failed to find him, and police said that as they were assuming the worst as he had not shown up at home by Sunday.

A man died on Sunday after falling from his canoe on the Danube. Passersby spotted the empty boat from a bridge in Regensburg and shortly after saw a man sinking in the water.

An immediate search operation failed to find him, leaving police the task of trying to find out who he was.