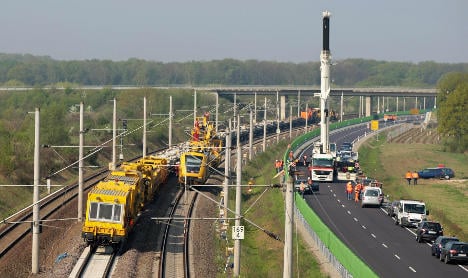 The track between Hannover and Berlin was blocked by a fallen-over crane which had been used in nighttime rail construction work.

This was part of the major project to renovate the complete high-speed stretch between Hannover and Berlin – one of the most used rail connections in Germany.

“This is the crucial East-West link,” said a spokeswoman for Deutsche Bahn.

The crane collapsed at around 1:20 am with the crane operator escaping with minor injuries.

All ICE traffic between the two cities had to be diverted via Braunschweig, Helmstedt and Magdeburg, creating frustration and delays of around an hour for thousands of holiday travellers.

The spokeswoman for Deutsche Bahn said it was unclear how long the route would remain blocked.

Regional train traffic which uses diesel engines has been able to use a parallel line which is not electrified. This also applies to the IC 77 Berlin to Amsterdam connection.

Meanwhile in Bavaria a digger crossing the tracks between Forchheim and Hirschaid managed to tear down the electric lines, halting train traffic between Nuremberg and Bamberg.

Long-distance trains were diverted via Fulda and Erfurt while regional services were replaced with buses.