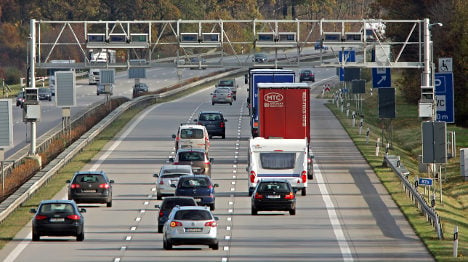 Despite denying for more than a year that any kind of toll for private cars was being considered, Transport Minister Peter Ramsauer’s bureaucrats have written a discussion paper outlining options.

The paper, titled, “Various scenarios for an e-ticket on federal motorways and regional roads,” has been leaked to daily Bild.

The government was forced into damage control Monday, insisting it had no plans for such a toll.

“There will be no toll,” deputy government spokesman Christoph Steegmans said on Monday in Berlin.

A spokeswoman for Transport Minister Peter Ramsauer said that no such policy was being prepared in the minister’s office.

“A toll on passenger vehicles is not, and has not been, under discussion.”

But the discussion paper reveals the government has at least been calculating how much money it could earn if it hits motorists with tolls even on roads already built, totalling as much as €365 per year, Bild reported.

Ramsauer told the paper: “There is no ban on ideas in my office. Where would we be if we prohibited experts from looking at every angle on infrastructure financing.”

He has repeatedly said in the past that such tolls were not part of the centre-right government’s coalition agreement and were therefore not on the table.

The calculations consist of four options for cars and trucks of up to 12 tonnes gross weight. Each option has a maximum price tag per year for any one vehicle, ranging from €80 to €365.

People who drive infrequently or foreigners passing through Germany could buy a two-month ticket for €30 or a 10-day ticket for €10. This option would bring in €3.41 billion to the government.

Maximum rates of €100, €155 and €365 are also canvassed, with corresponding shorter-period options also available. The most expensive option would deliver the government €15.5 billion per year.