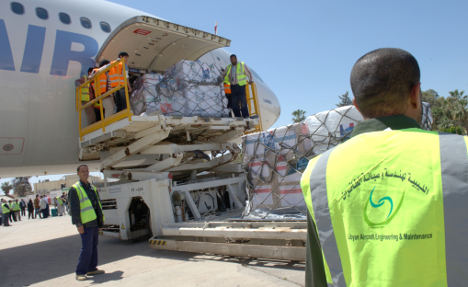 Fifty percent of people surveyed by Infratest dimap for public broadcaster ARD said they supported German participation in a possible military deployment by the European Union. Some 45 percent opposed sending the country’s soldiers on such a humanitarian mission.

Germany shocked its closest allies last month by refusing to back a UN resolution authorising military action against the regime of Libyan dictator Muammar Qaddafi, but opinion polls have shown most Germans support staying out of the conflict.

The survey on Friday also showed that 56 percent did not want Germany to accept refugees from the crisis hit region, while 39 percent of Germans thought their country had a responsibility to take in people.

The European Union and NATO strengthened their coordination Friday for a potential EU military mission to deliver urgent humanitarian aid to Libya’s shell-shocked city of Misrata.

One day after attending an Arab League meeting on Libya in Cairo, EU foreign policy chief Catherine Ashton met NATO foreign ministers in Berlin to discuss ties between the two organisations and the situation in Libya.

“We also remain seriously concerned about the humanitarian situation in Libya and stand ready, if requested by the UN, to send an EU mission to support humanitarian efforts,” Ashton said. “Pending the request, the planning is at an advanced stage. And in this context we are coordinating with others, including NATO,” she said in a statement after the talks.

The discussions came after the EU overcame Swedish objections to a potential military-humanitarian mission as the bloc approved the first phase of planning for such an operation, a European diplomat said.

The EU and NATO agreed to hold an informal meeting at the level of ambassadors to discuss Libya in the coming weeks, to “avoid a doubling up (of operations) and adjust their activities,” a German diplomat said.

The two organisations have exchanged their operational plans for Libya in case the United Nations asks the EU to send a mission to Libya, a NATO official said.

The EU has yet to make any final decision on a mission to Libya, which would likely include the deployment of ships. Any mission would need the green light from the UN.

The Libya Foreign Ministry warned Monday that “any attempt to approach Libyan territory under the cover of a humanitarian mission will be met with staunch armed resistance.”