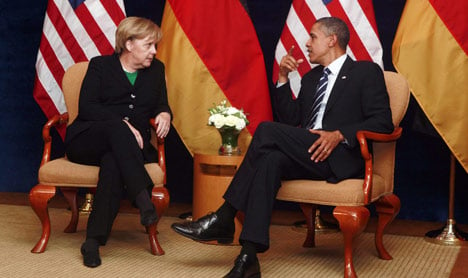 “The chancellor’s visit underscores the fundamental importance of the US-German alliance, the depth of the friendship between our people, and our commitment to move forward together on behalf of our shared interests and values,” a White House statement said.

“The president and the chancellor will discuss the broad array of issues on which the United States and Germany cooperate closely, including in Afghanistan, the Middle East, Iran, and on promoting human rights and global economic stability and growth.”

Aides have privately said that Obama harbours great respect for Merkel, who has seen her domestic political star wane in recent months, but recently Germany has been on the other side from Washington of key global issues.

Germany abstained in a UN Security Council vote on a resolution setting up a no-fly zone in Libya, is not taking part in the military coalition against Muammar Qaddafi and has called for a ceasefire. The German government also lashed out last year at the US Federal Reserve’s decision to pump more money into the economy, warning it could cause problems for the rest of the world.

Critics argued that the Fed’s “quantitative easing” stimulus amounts to an effective dollar devaluation, and has the potential to trigger a 1930s-style trade war if other countries respond in kind.

Obama will present Merkel with the Presidential Medal of Freedom during her visit, which recognizes contributions to the national security or national interests of the United States.