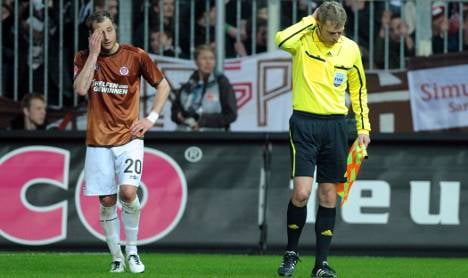 Schalke 04 had been leading 2-0 against nine-man St Pauli after 89 minutes, when assistant referee Thorsten Schiffner was hit by the missile.

He fell to the ground before quickly getting up uninjured and after consultation with the match referee it was decided to send the players off the pitch and halt proceedings.

“The referee made the right decision; this type of behaviour has no place on the football pitch. It’s a catastrophe for the club,” said St Pauli coach Holger Stanislawski.

Schalke had been on their way to their tenth win of the season before the incident, after goals from Spanish striker Raul (26) and German midfielder Julian Draxler (66).

The official concerned had disallowed a goal which would have given St Pauli the equalizer with a controversial off-side ruling after an hour of play.

St. Pauli now face a heavy fine and a stadium ban by the German football federation.

Promoted last season, the team were down to nine men after 79 minutes.

The Hamburg club were on a run of five consecutive defeats, not counting Friday’s game, and could be relegated on Sunday if VfL Wolfsburg beat Eintracht Frankfurt.

Schalke, who are tenth in the Bundesliga, travel to European champions Inter Milan in the Champions League quarter-finals on Tuesday.

It is only the seventh time a Bundesliga game has been halted since 1963.