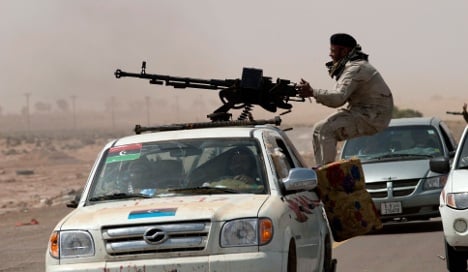 Westerwelle, who is visiting China, joined his counterpart Yang Jiechi in Beijing in calling for a ceasefire and a political solution on Friday – even as NATO allies are involved in a military campaign authorized by UN Security Council resolution 1973.

“There can only be a political resolution and we must get the political process underway. That should begin with a ceasefire that Qaddafi must heed to allow the peace process to begin,” he told reporters.

His remarks may further annoy Germany’s traditional NATO allies, the United States, France and Britain, all of whom are taking part in military action to stop Libyan dictator Muammar Qaddafi attacking rebels and civilians. While Qaddafi cannot be targeted under the terms of the UN resolution, the coalition wants him ousted from power.

Both Germany and China abstained two weeks ago in the United Nations Security Council in a vote on whether to intervene militarily. Germany’s traditional allies are already reportedly disappointed with Germany’s refusal to contribute and its Security Council abstention. Westerwelle’s remarks may entrench the view that Germany is siding with China, with whom it has growing economic and political ties, rather than the west.

Liechi said he was “very concerned” by the latest developments in Libya. “We see and hear reports every day that more civilians have been injured and killed and the military action is likely to escalate.

All countries had to follow the “spirit of the Security Council resolution.”

“We should find a solution by diplomatic means,” he said.

Westerwelle called on Qaddafi to “finally silence the weapons and allow there to be a peaceful political process.”