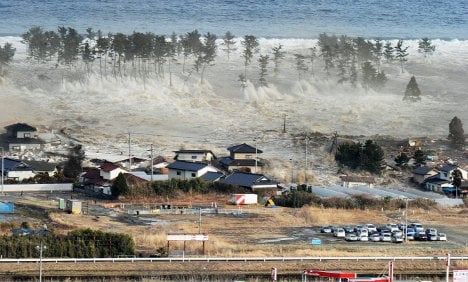 Chancellor Angela Merkel promised Berlin would do all it could to help in the aftermath of the catastrophe.

“Rest assured that Germany stands by Japan and is ready to help in these tragic hours,” she wrote in a telegram to Japanese President Naoto Kan, also expressing her sympathy for the relatives of victims and wishes of swift recovery for the injured.

In an address to Emperor Akihito, German President Christian Wulff wrote: “Germany stands at your side at this difficult time.”

Foreign Minister Guido Westerwelle told broadcaster ZDF that Japanese leaders had not yet asked for help.

“If help is necessary, the Germans will naturally come to the aid of our partner Japan,” he said. “Such a massive earthquake is, of course, a blow.”

The 8.9 magnitude quake that hit Japan’s northeastern coast was reportedly the strongest the country has seen in 140 years. It was followed by a 10-metre tsunami that destroyed everything in its path.

At least 59 people were reported dead, Japanese broadcaster NHK said, with countless others missing. Meanwhile millions of homes were said to be without power, other buildings had collapsed, and many locations were ablaze, news agency Reuters reported.

An oil refinery near Tokyo was also burning, while authorities evacuated thousands near a nuclear plant north of the city over fears of a possible radioactive leak.

Several strong aftershocks were also reported, as The Pacific Tsunami Warning centre issued an alert to countries as far away as Columbia and Peru, the agency said.