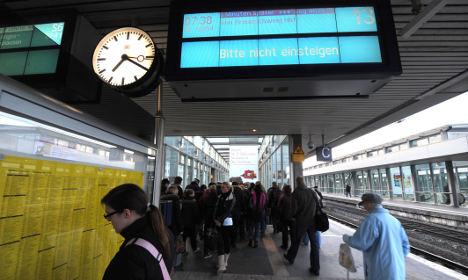 The strike by the GDL train drivers’ union over pay and working conditions began on freight rail lines at 8:00 pm on Wednesday, followed by a strike by drivers on passenger train routes nationwide from 4:00 am until 10:00 am on Thursday.

“No train?” asked a confused man in Leipzig’s main station. “No train!” came the terse response in the equally limited English of a Deutsche Bahn customer service representative. But the situation around the country wasn’t any better for those travellers understanding German either.

“I guess I’ll have to take the car,” sighed a businessman trying to get from Saxony to Munich. “But I’ll be beat, which is crap.”

In Munich S-Bahn trains were reportedly running just once per hour, though the S8 line from the airport to the city centre was still managing to run every 20 minutes.

Regional and long-haul routes for both passenger traffic and freight were not spared by the strike either, with trains reportedly sitting idle around the country.

“From the Bodensee (Lake Constance) to the Odenwald we have train cancellations,” a Deutsche Bahn spokesperson from the southwestern state of Baden-Württemberg said.

In the central state of Hesse regional and long-haul trains, in addition to S-Bahn routes in the Rhine-Main region, were all heavily affected by the strike.

Meanwhile train service was almost completely interrupted in the states of Saxony and Saxony-Anhalt.

Few S-Bahn trains were running in Halle, while routes around the city’s outskirts were “practically dead,” GDL’s deputy leader for the region Klaus-Peter Schölzke said.

The strike for freight train drivers centred on eastern Germany, where some 600 trains had reportedly been severely delayed by Thursday morning.

Many companies reportedly began turning to truck delivery for their goods, reports said.

The union hopes the strike will push national rail operator Deutsche Bahn and its private competitors to “put an offer on the table at last that can be the basis for talks,” GDL boss Claus Weselsky said on Wednesday.

Following a series of temporary strikes in recent days, more than 90 percent of members voted for an indefinite strike on Monday.

Deutsche Bahn has reportedly sent out hundreds of additional employees to train stations around the country to aid passengers affected by the strike. The company will refund tickets without charge and has set up a toll free number for passengers: 08000 99 66 33