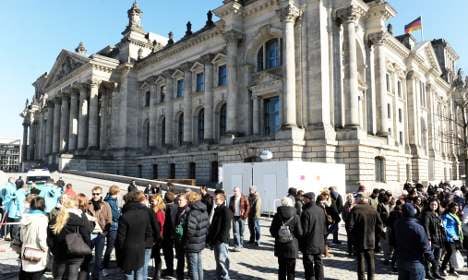 “We can’t work,” a member of the Green party parliamentary group said.

Elevators, electric doors, computers and even restrooms were out of operation following the outage, which electricity provider Vattenfall said was likely caused by cable damage at a nearby construction site along Berlin’s grand boulevard Unter den Linden.

Telephone lines remained in use, but a number of parliamentarians forwarded calls to their electoral district offices.

As the outage wore on, authorities became concerned that emergency power sources would run out in the building that houses the environmentalist Greens’ parliamentary offices – which led to what may have been an uncomfortable situation for some.

“Three times they announced throughout the building, ‘Attention, this is the police, avoid using the toilets,’” one research assistant to a Greens parliamentarian from Bavaria told The Local.

The building’s plumbing system pumps were apparently powered by electricity, he said.

After the power went out around 9:30 am, he attempted to organize his office and made a few phone calls, but many people took advantage of the situation for extended smoke breaks on a sunny spring day.

“I think the nicotine consumption among staff spiked considerably,” he told The Local.

Meanwhile the Chancellery and government press office were still in full operation, Merkel’s government spokesman Steffen Seibert wrote on microblogging platform Twitter – a tool used by many government officials throughout the day on their mobile devices as the outage persisted.

A Vattenfall spokeswoman told the website of news magazine Der Spiegel that the Chancellery did suffer a short blackout.

Power was expected to be restored later on Tuesday.