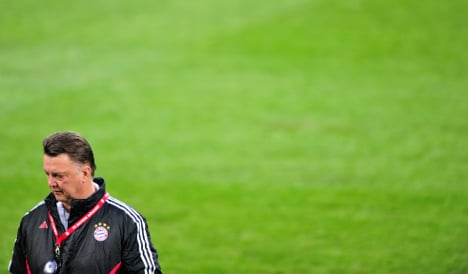 “The reason for the contract being annulled is differing views on the club’s strategic direction,” the Bundesliga club said in a statement.

The German giants, who are accustomed to winning, are fifth in the Bundesliga and seven points adrift of the second place that would guarantee Champions League football next season. By their standards this is a poor season.

“Of course we know, looking at the Bundesliga table, that it will be very hard to qualify for the Champions League next season, but we are going to give it our all,” chairman Karl-Heinz Rummenigge said Monday.

After a slow start, van Gaal took the German giants to a 22nd league title, their 15th Cup and a Champions League final in which they lost 2-0 to a Jose Mourinho-inspired Inter Milan.

Bayern’s patience with the 59-year-old Dutchman appeared to have run out after a fully deserved 3-1 defeat to Hannover on Saturday, which left them 19 points shy of where the defending champions expect to be – at the top.

After the Hannover game, Rummenigge said the defeat and the manner of the

loss had been for him the “low point” of the whole season.

The paper reported earlier Monday that van Gaal had been given a three-game stay of execution – two Bundesliga games and next Tuesday’s Champions League round-of-16 second leg clash with Inter Milan.

If they don’t win these games, and Bayern fail to qualify for the Champions League – the final of which will be at Bayern’s Munich ground in 2012 – the Dutchman could be shown the door even sooner, Bild said.

Bayern Munich said only that van Gaal had agreed that all efforts would go towards meeting certain “minimum targets” this season.

Bild said negotiations had already been opened with the first two of these options, as well as with Matthias Sammer, currently director of sport at the German Football Federation.

With a characteristic lack of modesty and an undertone of spite, van Gaal himself said in late 2010 that his were not easy shoes to fill.

“There are not many who have my experience and track record,” he said.