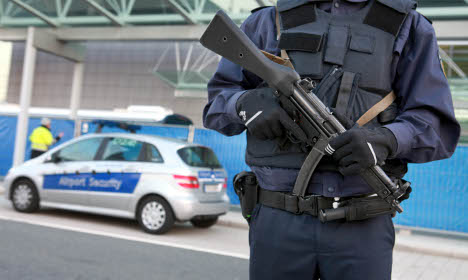 US military buses loading and unloading servicemen at the busy air hub will no longer use public roads after 21-year-old Kosovar Arid Uka carried out the attack on March 2.

Rhein said also said the authorities would decide within 14 days whether to ban the Islamist Dawa organization. The group’s website was allegedly visited by the shooting suspect during the short time it took for him to become radicalized.

The conservative politician and leader of the upcoming state interior ministers’ conference also said he would appeal for more online surveillance of suspected Islamists.

While such things as telecommunications data retention would not have prevented this particular attack, because the suspect radicalized so quickly, it remains an indispensable tool for security officials in certain cases, he said.

Further discussion of terrorism surveillance will be a key discussion topic during the interior ministers’ conference, he said.

“The cameras here worked, and the footage recorded has been given to the investigators,” Thomas Uber, a spokesman for airport operator Fraport, told news agency AFP in response to a weekend report in the daily Die Welt that they had failed.

Uka shot dead two airmen and seriously injured two others after boarding their military bus, shouting “Allahu Akhbar” (“God is Greatest”) as he did so, according to German federal prosecutors.

He then allegedly put his handgun to a fifth serviceman but it jammed. Pursued by this serviceman, he fled into the terminal building where he was overpowered and arrested.

Prosecutors said on Friday that he told investigators the attack was to avenge what he saw as atrocities by US troops in Afghanistan.

If confirmed as such would be the first Islamic extremist attack on German soil.

There are however no indications that the alleged gunman, whom investigators believe was radicalised in large part via the Internet, had links to any “international terrorist groups,” prosecutors said.

Meanwhile, the head of the German Police Union, Rainer Wendt, has called for 2,000 additional staff to monitor extremist websites.

A month ago German authorities had announced that additional security measures imposed late last year in response to indications of an imminent “terrorist” attack were set to be gradually scaled back.