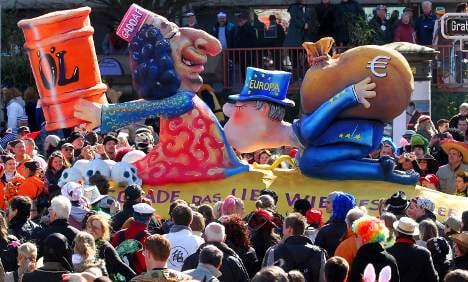 Some two million costumed revellers were expected in the cities of Cologne, Düsseldorf, Mainz and beyond for the Shrove Monday parades, with plenty of sunshine in the forecast.

Festivities were set to begin around 10:30 am in the festival’s main city Cologne, where the parade will be some 6.5 kilometres long this year.

Karneval organizers in Mainz, which hosts the country’s second largest parade, said they expected half a million partygoers.

The German Karneval season kicks off November 11 and culminates this week with the observance of Ash Wednesday in the predominantly Roman Catholic Rhineland region.

Meanwhile a Karneval parade in the Brandenburg city of Cottbus ended in disaster on Sunday, when steel scaffolding along the route collapsed onto participants.

Eleven people were injured, two severely, when the scaffolding meant to hold camera cables fell. Among the injured was a three-year-old girl.

But the parade, billed eastern Germany’s largest, continued despite the accident, with most of the some 4,000 costumed participants unaware of the incident.

Fire fighters said they believed the scaffolding fell after being rammed by a parade vehicle, but police are still investigating the accident’s cause.