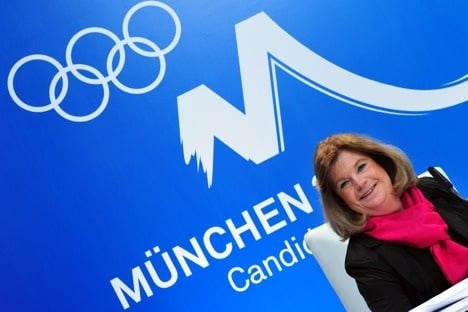 Sweden’s Gunilla Lindberg, the head of the 14-strong IOC delegation, said her team have been impressed with what they have seen at the end of the four-day visit to Bavaria as part of their tour of the three bid cities.

Having already visited Munich’s rivals, Annecy, France, and PyeongChang, South Korea, the team made its final stop here with the successful bid to be announced on July 6 in Durban, South Africa.

The evaluation commission will publish its report on 10 May, but, as expected, Lindberg gave no hints to which bid will be successful, saying all three cities could host the games.

But she praised the ‘strong support’ from the German government and the ‘outstanding and professional’ team behind the Munich bid.

“Germany is a big winter sports nation which has experience of hosting top winter events,” she said.

She said she had been impressed to meet several athletes during the tour, which culminated Friday with a visit to the sliding centre at Lake Königssee, the potential venue for the bobsleigh, luge and skeleton events.

As part of the bid, Munich will host the ice events while the ski resort of Garmisch-Partenkirchen will host the alpine and nordic competitions.

German Chancellor Angela Merkel hosted a banquet for the delegation on Thursday and backed Munich’s bid by declaring her country will produce a sporting ‘winter wonderland’, if successful.

“I think we have a great chance to plan a winter wonderland after the summer fairytale, which was the football World Cup in 2006,” the German leader said.

On Friday, Olympic luge champion Felix Loch greeted the delegation at the Lake Königssee venue and said it would be ‘perfect’ for hosting the sliding events.

Loch, 21, won luge gold at the 2010 Winter Olympics in the men’s singles on the notorious Whistler Sliding Centre track which claimed the life of Georgian luger Nodar Kumaritashvili, who died training for the event.

The Königssee track is the world’s oldest artificial ice rink, but was renovated in 2011 to host this year’s bobsleigh and skeleton world championships and is one of the most modern sliding centres in operation.

“This ice rink would be perfect for the Olympic Games,” said Loch, who lives in Königssee.

“It is very challenging and great fun to train and compete on. In 2018, I will be 28 years old, which is the perfect age to compete in my home town on my home ice rink.”

Georg Grabner, the area’s district commissioner, said the track is of the highest standard.

“The world championships demonstrated that we are prepared for hosting big international sports events and that the sliding centre already meets today’s rigorous international standards,” he said.

If the winter games are held in Munich, 1.8 million tickets, costing between €33 and €505, are expected to generate €178 million with the event expected to cost €1.3 billion to stage, organisers have said. The average price of a ticket would be just under €100.