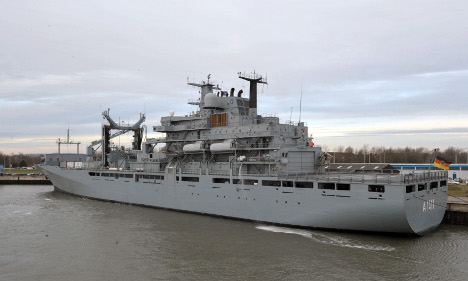 “The German government has decided to bring migrants from Tunisia to Egypt,” Westerwelle told reporters after a meeting with his Slovak counterpart.

“The pictures coming out of Tunisia are overwhelming,” he said. “Most of the migrants are Egyptian,” adding that the German navy warships were on their way.

“I’m working on the assumption that already tomorrow the first operation will begin,” Westerwelle said, adding the evacuation was part of a sweeping United Nations mission.

Europe and the United States on Wednesday mobilised planes, ships and funds to help a massive evacuation effort at Tunisia’s border with Libya, in response to UN pleas to repatriate the thousands fleeing the violence.

Most of the thousands massing at the border were male foreign migrant workers: 85 percent from Egypt, but others from as far afield as Bangladesh, China and Vietnam.

Meanwhile the German Foreign Ministry announced it had closed its embassy in Tripoli. The embassy’s six employees were flown to Paris on Thursday morning in light of deteriorating security conditions in the Libyan capital.

Over the past week, the German diplomats had organised the evacuation of nearly all the country’s nationals from the North African country as fighting between government loyalist and opposition forces worsened.