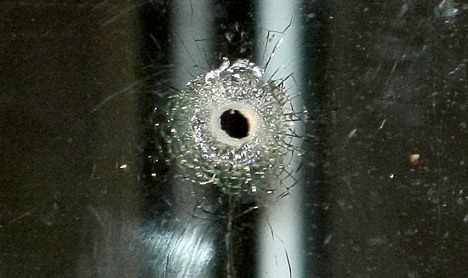 “In view of the circumstances, there is a suspicion that this was an act with Islamist motivation,” said federal prosecutors after Wednesday’s shooting

on a bus at Frankfurt airport.

Arid Uka, a 21-year-old Frankfurt resident of Kosovar origin, has since admitted to carrying out the shooting.

Boris Rhein, interior minister of the western German state of Hesse, said the suspect, now in custody, had worked at the airport in a postal distribution centre, but said there was no evidence he was part of an extremist group.

“Currently, investigations indicate that he was working alone and there is no evidence of any network,” said Rhein.

Germany’s federal interior minister said he saw no reason to boost police presence around the country.

A month ago German authorities had announced that additional security measures imposed late last year in response to indications of an imminent “terrorist” attack were set to be gradually scaled back.

Uka, who grew up in Frankfurt, cried “Allahu Akhbar” (“God is Great”), witnesses told reporters, before opening fire in the bus at one of Europe’s busiest airports.

In what appears to have been the first Islamist “terror” attack on German soil, he also injured two other US airmen. One of them was reportedly shot in the head and was fighting for his life on Thursday in a Frankfurt hospital. The other was also in intensive care.

Investigators were studying a page on social networking website Facebook believed to be the suspect’s, on which he made no secret of his extremist tendencies, news magazine Der Spiegel reported.

On the page he was a “fan” of several Islamic websites, had a link to a jihadi war song and had commented “this stupid kuffar (‘unbeliever’)” on a posting, Der Spiegel said. The page was no longer available on Thursday.

A police source in Pristina said that the suspect was an ethnic Albanian from the town of Mitrovica in the north of the disputed territory of Kosovo, and did not have a criminal record.

The Bild daily reported that police raided the suspect’s flat in a grubby tower block on the outskirts of Frankfurt after the attack, removing whole sacks of material.

Der Spiegel said on its website that he had tried several times to travel to Afghanistan but that after being prevented from doing so had decided to attack US soldiers in Germany.

It also quoted neighbours as saying they were shocked and that they never suspected he was an extremist. He did not have a beard or wear traditional clothing, one neighbour told the magazine.

The US military has around 50,000 personnel in Germany at a number of major bases, including Ramstein where the bus was headed, which are used as hubs for operations in Afghanistan and Iraq.

Germany opposed the 2003 US-led invasion of Iraq but has more than 5,000 troops in Afghanistan. It had never suffered an attack by Islamic extremist until now, however, a number of suspected bomb plots have been uncovered.

The September 11, 2001, attacks on the United States were planned in part in the German port city of Hamburg by an Al-Qaeda cell led by Mohammed Atta, the hijacker of the first plane to strike New York’s World Trade Center.

In March 2010 a German court jailed four Islamic militants including two German converts to Islam who dreamed of “mounting a second September 11” for a plot thwarted in 2007 to attack US soldiers and civilians in Germany.