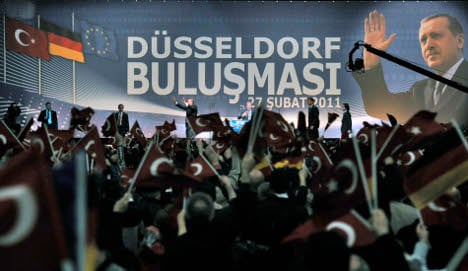 “We are following xenophobia in some European countries, primarily Germany, with great concern… We urge politicians and especially the media… not to fan it,” he told a crowd of Turkish immigrants in the west German city of Düsseldorf, in a speech aired on Turkish television.

“Islamophobia is a crime against humanity as much as anti-Semitism is,” the Islamic conservative Erdogan said.

Germany is home to 2.5 million Turks, many of which are frequently criticized failing to properly integrate despite having settled in the country decades ago.

A German central banker sparked a controversy last year when he said that poorly educated and unproductive Muslim immigrants made Germany “more stupid.”

“I want everybody to learn German and get the best education… I want Turks to be present at all levels in Germany – in the administration, in politics, in civil society,” Erdogan told the crowd.

“Yes to integration… But no to assimilation… No one can tear us from our culture,” he said.

Erdogan’s remarks were similar to controversial comments he made in nearby Cologne in 2008 that assimilation, which he defined as a person being “forced” to abandon their culture, was a “crime against humanity.”

“We will recognise the blue card as an identity document and make it easier for you to make transactions at government offices and banks” in Turkey, he said.

On Monday, Erdogan was to meet with Chancellor Angela Merkel in Hannover, where the two will jointly inaugurate a technology fair.

Germany, together with France, opposes Turkey’s bid to join the European Union and advocates a special partnership for the sizeable mainly Muslim nation, an idea Ankara flatly rejects.

Speaking in Istanbul before his departure to Germany, Erdogan reiterated frustration over the sluggish pace of his country’s accession talks, which face the risk of grinding to a halt.

“If they do not want Turkey in, they should say this openly… and then we will mind our own business and will not bother them,” Erdogan said.

“But there is a lot we can give the EU and the EU has a lot to give Turkey… We want to work on in solidarity,” he added.

Erdogan said he would shorten his programme in Germany to return to Istanbul Tuesday for the funeral of Necmettin Erbakan, his mentor and a former prime minister, who died of a heart failure earlier Sunday, aged 84.

He would then travel to Brussels for talks with European Commission head Jose Manuel Barroso.