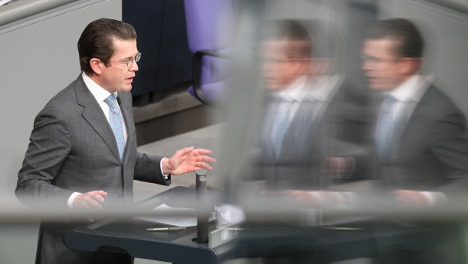 “The minister has lost his connection to reality,” said Oliver Lepsius, the successor to his professor at Bayreuth University.

“We have been taken in by a con artist. It is a unique audacity with which he hoodwinked honoured people of the university.”

He said Guttenberg had “systematically and methodically” pulled together scientific sources to plagiarize, and then said he did not know what he was doing.

“This is where the political dimension of the scandal lies,” said Lepsius.

Guttenberg admitted having made grave mistakes in his dissertation, saying he was under enormous pressure as a father and member of parliament during the years he was working for it. Yet he maintains he did not deliberately copy anything.

He has stopped using his Dr. title, and the university has stripped him of it.

Also at the weekend, the former president of the German Research Society, Ernst-Ludwig Winnacker warned against dismissing the affair as unimportant.

“We academics cannot lock anyone up, only a judge can do that. But the punishment of academia is that one stands in the pillory forever,” he told Der Spiegel magazine.

“People who do this are done for in academia,” he said, suggesting that the minister should consider “whether he can still stand in front of his soldiers or in front of students of the Bundeswehr schools and talk of values.”

Several respected lawyers have expressed their doubts that Guttenberg could have accidentally copied as much of his thesis as he claims.

“I would not believe a candidate who, in such a case, claimed it was just negligence,” Cologne law professor Thomas Weigend told Der Spiegel.

“No judge would believe a candidate who had copied more than a hundred pages of his doctorate and then claimed he had done so by mistake,” said fellow layer Michael Hofferbert, who specializes in conflicts over examination papers.

Although Chancellor Angela Merkel has so far stood by Guttenberg, Saxony-Anhalt state premier Wolfgang Böhmer became one of the most senior conservatives to doubt whether he could stay in office.

He wondered how long Guttenberg, who is a member of the CDU’s Bavarian sister party the Christian Social Union, would be able to take the pressure.

“There will always be people who will enjoy making allegations about the mistakes in his doctorate in public,” he told the Berlin paper Tagesspiegel am Sonntag.

“I don’t know how long he will be able to take this.”

Guttenberg’s star with Merkel could more likely be tarnished by what a report said she regarded as an “only very rudimentary and poorly-considered basis for decisions about reform of the Bundeswehr.”

Der Spiegel reported at the weekend that criticism of his work at the Defence Ministry from the Chancellery was much harsher than previously thought.