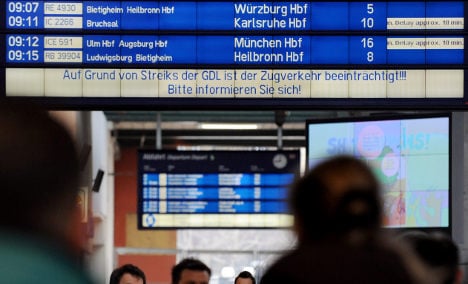 Train drivers’ union GDL called a limited strike from 8:30 am to 11:30 am in a bid to pressure employers in an ongoing wage dispute.

The strike was centred in the Rhine-Main region, Stuttgart and Hamburg, but other parts of Germany were also expected to see major disruptions to regional and long-haul service too.

Though the second strike of the week was set to last one hour longer than the first, GDL official Norbert Quitter said its later timing was meant to protect commuters from being late to work.

The company also urged people to go online or call 08000 99 66 33 to find out more about how their region is coping with the strikes.

Any passengers forced to find other means of transportation can have their train ticket refunded at Deutsche Bahn service centre or take the next available train at no extra charge, the company said.

The GDL union has demanded wage increases for some 26,000 regional, long-haul and freight train drivers. They are hoping to get 105 percent of the current average wage at Deutsche Bahn. Many private train companies pay their drivers up to 30 percent less than Deutsche Bahn wage levels.

The union has threatened to shut down the nation’s railways if Deutsche Bahn and six other private train services fail to present an acceptable wage offer.

The company renewed its sharp criticism of the union, with one spokeswoman calling the second strike as “unnecessary as goitre.”