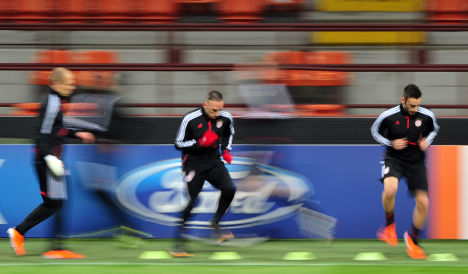 Bayern are third in the German Bundesliga but a victory for Borussia Dortmund at Munich’s Allianz Arena would give the defending champions a massive 16-point deficit to close with 10 games remaining.

It’s not too early to talk about a possible title-decider in February, and Bayern admit they need three points to stay in the race.

“We absolutely must win on Saturday to fulfil our goal of finishing at least second this season,” admitted Bayern chairman Karl-Heinz Rummenigge.

A late goal from Mario Gomez on Wednesday sealed Bayern’s 1-0 first-leg victory in Milan with the return leg for the Round of 16 clash set to take place in a fortnight in Munich.

Despite their impressive win, Bayern’s players were in no mood to celebrate at the San Siro as they prepare for Saturday’s showdown with Dortmund.

“There were few celebrations, we need to remain concentrated,” said Rummenigge.

Dortmund are heading for their first league win since 2002 and a win on Bayern’s turf will prove their title credentials.

The game pits Bayern’s superstars against a hard-working and youthful Dortmund side.

Bayern are packed with big names like Gomez, who has scored 28 goals in 32 games this season, plus Dutch winger Arjen Robben and Franck Ribery – a tandem the German media have dubbed “Robbery.”

The German giants are loved and loathed in equal measure in Germany and Dortmund’s Kevin Grosskreutz, a life-long Dortmund supporter, summed up the attitude of his team’s fans to their Munich rivals.

“Bayern has many – as I always call them – ‘fair-weather fans’,” said Grosskreutz. “The Dortmund fans always stand behind their club through thick or thin.”

Dortmund are sweating over goalkeeper Roman Weidenfeller ahead of the Munich clash as the 30-year-old was injured in a training clash and a scan on Wednesday revealed he has over-extended knee ligaments.

If he misses out, Dortmund’s reserve, ex-Melbourne Victory shot-stopper Mitchell Langerak, 22, will make his first appearance for Borussia at the sold-out Allianz Arena.

Both Bayern midfielders Bastian Schweinsteiger and Luiz Gustavo face a one-match ban if they pick up a fifth yellow card in the match.

Second-placed Leverkusen play host to strugglers Werder Bremen, who are just one point from the relegation zone, on Sunday.

Bremen are looking for their first win from six games and need to bounce back from last week’s disastrous 4-0 hammering at Hamburg.

Fourth-placed Hannover are at mid-table St Pauli on Saturday and wait on the fitness of Ivory Coast striker Didier Ya Konan, who has scored 11 goals in 21 league games this season, as he struggled with a knee injury.

Bottom side Borussia Mönchengladbach are at fellow relegation battlers Wolfsburg on Friday, while second-from-bottom VfB Stuttgart are at mid-table Eintracht Frankfurt on Sunday.