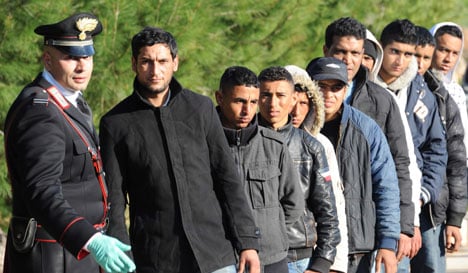 EU interior ministers are meeting in Brussels on Thursday. High on the agenda will be how to respond to an expected wave of refugees fleeing the escalating violence in Libya. After the recent unrest in Tunisia, the number of migrants making their way to Italy from that country jumped dramatically.

Lüke said that if Italy cannot fulfill its duties regarding a fair asylum policy because of the increasing numbers of North African refugees, asylum seekers must be directed to other EU countries, especially Germany.

“Germany, as the largest and most economically powerful country in Europe, has a special responsibility to act,” she told the newspaper.

But German Interior Minister Thomas de Maizière said he does not predict a stream of hundreds of thousands of refugees coming from Libya to Europe. On ZDF television on Thursday morning he warned that all the talk in Europe about a looming refugee crisis could become a self-fulfilling prophecy. He said Europe’s focus should be on helping improve conditions in northern Africa.

“People stay in countries with stable democracies,” he said.

Amnesty Germany also called on the EU to put a stop to arms exports to other regions in crisis. She said in 2009 Germany exported €53.1 million in armaments to Libya, although the human rights situation even then was abominable.