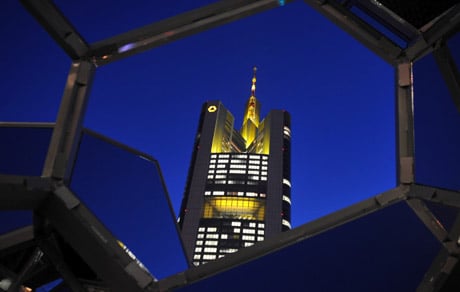 Commerzbank said it made a net profit of €1.43 billion ($1.96 billion) last year, compared with a loss of €4.5 billion in 2009 according to international standards known by their acronym GAAP.

In the fourth quarter of 2010, the partially state-owned bank recorded a net profit of €257 million, turning around a loss of €1.9 billion in the same period a year earlier, a statement said.

“2010 was a successful year for Commerzbank in many respects,” it quoted chairman Martin Blessing as saying.

“We have achieved key targets and the Commerzbank group has returned to profitability one year earlier than forecast.”

The German government took a silent stake of 25 percent in the bank as it granted public aid of more than €18 billion to Commerzbank, including €16.2 billion via a market stabilization fund known as SoFFin.

Blessing said Tuesday that “we want to reduce the silent participation of SoFFin significantly already in 2011.”

The bank could not do so last year because accounts established according to German accounting standards showed it with a net loss of €1.2 billion as a result of problems at its real-estate unit Eurohypo.

Repayment of the state’s silent participations are “based on rules for the payment of dividends,” which that loss ruled out, Commerzbank explained.

The bank was nonetheless clearly doing much better than in 2009, as it posted gross revenues of €12.7 billion, a gain of 16 percent from the year-earlier figure.

Operating profit climbed to €1.4 billion from a loss of €2.3 billion, while provisions taken against possible loan defaults fell by 40 percent to just under €2.5 billion.

Finally, Commerzbank’s Tier 1 ratio, a measure of its ability to weather unexpected losses, now stands at a healthy 11.9 percent, up from 10.5 percent in 2009.