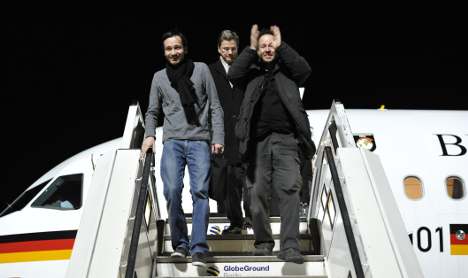 Marcus Hellwig and Jens Koch, a reporter and photographer for the weekly Bild am Sonntag newspaper, were taken into custody on October 10 after interviewing the son and lawyer of a woman sentenced to death by stoning for adultery.

The two, who had entered the country on tourist visas, were given 20-month jail terms for acting against “national security.” But an Iranian court commuted their sentences to fines of around €35,000 each and allowed them to leave the country.

Westerwelle went to Iran personally on Saturday, the first German Foreign Minister to do since 2003. While he was there he met Iranian President Mahmoud Ahmadinejad before flying back to Berlin with the journalists on the government plane on Sunday morning.

“Many people helped,” Westerwelle said. “Many wheels were turning within wheels, many sacrificed much to contribute.”

He also thanked his Iranian counterpart Ali Akbar Salehi for what he said was helpful engagement in the matter. It was a “very complicated case,” he said.

Koch’s father Andreas Hartmann told the Bild am Sonntag that he was overjoyed when he got the call to say his son would be released.

“I don’t think I said anything on the phone, just listened and cried,” he said. “I am still shaking.”

Miriam Lobinksy and Christina Hellwig, sisters of Marcus Hellwig who had been active in the campaign to free the two men, expressed relief.

“We are thankful and happy and really pleased that the long period of worrying and hoping has come to a good end,” said Christina Hellwig.