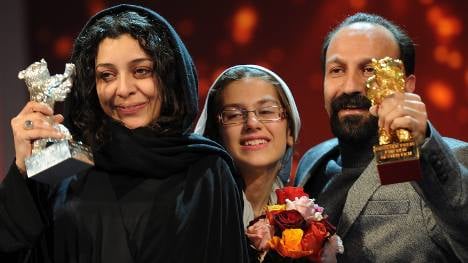 The picture by Asghar Farhadi tells the story of a crumbling marriage and examines the conflict between strict religious observance and the shifting values of the educated urban elite in Iranian society.

It was the favourite among 16 international contenders to win the coveted Golden Bear at the first major European film festival of the year, which tends to favour timely, politically charged cinema.

Farhadi, who won a best director prize for his haunting film “About Elly” at the 2009 Berlinale, paid tribute to banned Iranian director Jafar Panahi in his acceptance speech.

“I would like to take this opportunity to think of the people in my country, the country where I grew up, where I learned history,” said Farhadi, who was born in 1972 and has made five feature films.

“This is a great people, a patient people, a good people. I want to think of Jafar Panahi. I really think his problems will soon be solved and I hope he will be standing here next year.”

The 11-day event focused on the plight of Iran’s filmmakers, offering a seat on the jury to Panahi, presenting a retrospective of his work and leaving a chair vacant for him at every competition screening.

An Iranian court jailed Panahi for six years in December and banned him from making films for 20 years. Although he is free on bail pending an appeal, he is barred from travelling abroad.

The international jury, led by Italian-American actress Isabella Rossellini, also awarded the Silver Bear prizes for best actor and best actress to the entire ensemble of “Nader and Simin”.

Babak Karimi, who played a judge settling a dispute between two families, said: “I’d like to thank the jury … In the worst situation, it is the job of the artist to do the best job possible.”

Berlinale audiences had quickly embraced the film in what many observers called an underwhelming year in the competition.

“Just when it seemed impossible for Iranian film-makers to express themselves meaningfully outside the bounds of censorship, Asghar Farhadi’s “Nader and Simin – A Separation” comes along to prove the contrary,” Hollywood Reporter critic Deborah Young wrote in a glowing review.

The award also came on the day Iran fined and released two German journalists arrested for interviewing the son and lawyer of a woman sentenced to death by stoning, a case that had strained relations between Berlin and Tehran.

The Silver Bear runner-up Jury Grand Prix went to “The Turin Horse” by Hungarian veteran Bela Tarr, which traces the hardscrabble lives of two peasants and their long-suffering steed.

German filmmaker Ulrich Köhler won the Silver Bear for best director for “Sleeping Sickness” about European aid workers in Africa caught between fascination and frustration with their environment and a longing for home.

Köhler spent part of his childhood in Zaire, today’s Democratic Republic of Congo, with his aid worker parents.

“I’d like to thank my parents for having given us children such a fear-free and exciting life,” he said.

US independent director Joshua Marston and his co-writer Andamion Murataj won the best screenplay Silver Bear for “The Forgiveness of Blood”, the story of an Albanian blood feud and its impact on two teenagers caught between ancient practices and modern aspirations.

Marston, whose Colombian drug-mule drama “Maria Full of Grace” picked up a Silver Bear in 2004, said his latest film arose from a fascination with that struggle.

“We did a lot of research and had hundreds of conversations with many Albanians about their experiences there,” he said. “I’d like to dedicate this to Albania.”

The Berlinale prizes were awarded as follows –

Silver Bear for best screenplay: Joshua Marston and Andamion Murataj for “The Forgiveness Of Blood” (US/Albania/Denmark/Italy)

Alfred Bauer Prize for work of particular innovation: “Wer wenn nicht wir” (If Not Us, Who) by Andres Veiel (Germany)

Best first feature film: “On the Ice” by Andrew Okpeaha MacLean (US)