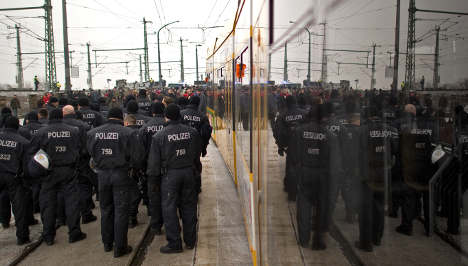 Up to 6,000 neo-Nazis are expected to take part in the marches through the city, while up to 20,000 anti-Nazi protestors are also expected. Last weekend 17,000 Dresden residents formed a human chain to show their disdain for the far right.

Fighting had already broken out between demonstrators and police by lunchtime on Saturday, with the police using pepper spray and a water cannon. Some witnesses said demonstrators threw fireworks at the police.

A police spokesman said thousands of left-wing anti-fascists were streaming into the city, some of whom could be prepared to use violence.