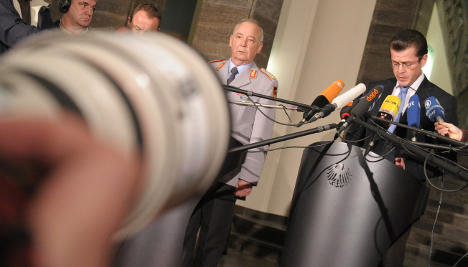 Guttenberg last week said he would no longer use his doctorate title until an investigation is completed into accusations that he plagiarized parts of his doctoral dissertation. He apologised for not properly citing parts of the dissertation but denied having deliberately copied others. His alma mater, Bayreuth University, has demanded he officially respond to the allegations.

New allegations surfaced on Saturday when the news magazine Der Spiegel reported that in 2004 Guttenberg, then an MP, instructed an employee of the parliament’s research department, Ulrich Tammler, to write an essay. It was entitled “The question of a reference to God in the US Constitution and the legal ruling of the Supreme Court on the separation of church and state.”

Tammler, who has two doctorates of his own, delivered the paper as requested to Guttenberg and heard nothing more about it.

MPs are only allowed to use the work of parliamentary researchers for work related to their mandate.

While Guttenberg modified a few words in the essay, he inserted it largely unchanged into his dissertation, the magazine said. Tammler was not named anywhere in the dissertation, nor listed as a source.

Der Spiegel quoted the research service’s guidelines which say that all rights to work conducted by its researchers remain with the parliament. Permission must be granted for the publication of any work, the guidelines say.