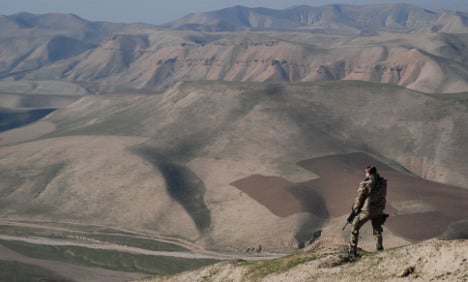 Exact details remain unclear, but initial reports said that a man dressed in an Afghan army uniform opened fire with handguns inside or near the “OP North” camp in the Baghlan province at around 11 am local time.

A number of Afghan soldiers and workers were said to be at the outpost helping expand the facilities there.

The International Security Assistance Force (ISAF) in Kabul initially confirmed that an international troop member had been killed in the Baghlan province, but had returned fire, severely injuring the shooter. It was later reported that a two other soldiers had died of their injuries.

Meanwhile, the German Defence Ministry said it would wait to reveal details of the death until after the next of kin had been notified.

“I carry the responsibility for the deployed soldiers, which has become bitterly apparent on a day like today,“ said Guttenberg, who remains under intense political pressure as accusations continue to unfold that he plagiarized parts of his doctoral thesis.

On Wednesday, the same day the scandal broke, Guttenberg set out on a surprise trip to visit troops in Afghanistan, overnighting at the OP North outpost and returning to Germany on Thursday evening.

The base is home to about 500 soldiers and considered among the most dangerous of those manned by Bundeswehr troops. Over the last year five soldiers have been killed in the area, though the security situation had reportedly improved in recent weeks.

Forty-six German troops have been killed since the Bundeswehr began participating in the ISAF mission in 2001. Some 5,000 Bundeswehr soldiers are currently stationed in the Hindu Kush region of northern Afghanistan, for which Germany is responsible.

Germany will begin withdrawing its troops at the end of 2011.

There are around 140,000 international troops serving in Afghanistan, around two-thirds of them from the United States.