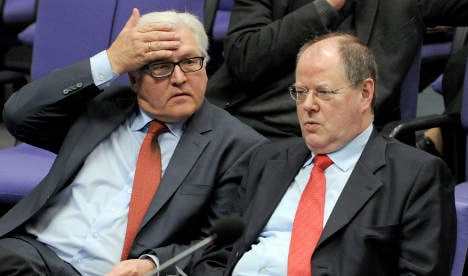 “I am not available for this post,” Steinbrück told Monday’s edition of the Süddeutsche Zeitung newspaper, squashing Steinmeier’s proposal.

Steinbrück also criticised the manner in which Steinmeier, who is head of the SPD’s parliamentary group, had suggested his name – in an interview with Der Spiegel magazine’s website over the weekend.

“I am concerned about this procedure. That is not my idea of how a personnel question of this significance can be solved,” said Steinbrück.

Steinbrück, who served as finance minister during the last government in coalition with Angela Merkel’s Christian Democratic Union, had worked with Axel Weber at the head of the Bundesbank, to produce the finance packages to rescue failing banks and boost the economy.

Weber provoked what many are saying is a crisis of credibility for Merkel by resigning his position as president of the Bundesbank and ruling himself out of the running to head the ECB after saying he felt he did not have enough support for the latter job from European governments.

He would also have not had the support of the government as a candidate, with the CDU and coalition partner the Free Democratic Party thought unlikely to put forward a political rival as ECB candidate.