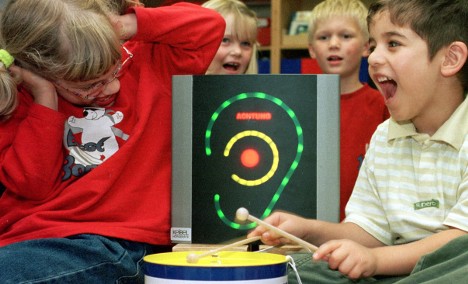 Heinz Hilgers, president of the agency, told the Neue Osnabrücker Zeitung on Thursday that such ideas were the product of a child-phobic culture. “Such things would never have been said 50 years ago,” he said. “Now children are being marginalized.”

He added that it had always been a scandal that noise legislation put children’s noise in the same category as industrial noise.

“A sense of community can only be fostered by mutual respect, and comparing a child’s expression joy of life with a jackhammer is not a sign of respect,” he said.

He compared the screaming of children to the “hammering of a pneumatic drill.” He was speaking out in opposition to the government’s plan to allow child centres and kindergartens in all residential areas.

According to Siegmund Chychla of the Hamburg Tenants’ Association, disputes over noise from children belongs to the list of most common complaints.

The Berlin city government last year thwarted crotchety complainers with a ban on lawsuits against noise disturbances by children.

“Noise from playing children is a socially appropriate manifestation of young life and fundamentally tolerable in interest of the preservation of their development,” the Social Democrats’ said in their proposed change to the city’s noise laws.