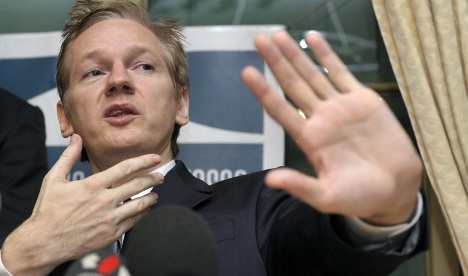 Domscheit-Berg has said he wants his book, “Inside Wikileaks: My Time with Julian Assange at the World’s Most Dangerous Website,” to expose both the good and the bad aspects of the now famous site, which has sent ripples around the world with its publication of secret documents regarding the Iraq war and US diplomatic communications.

But in an interview with the German news magazine Stern published Wednesday, the focus was often on the darker side of the organisation founded by Assange. Domscheit-Berg and several other former Wikileaks employees broke with the enigmatic Australian last August over disagreements about the website’s future course.

Domscheit-Berg, who as the organisation’s top programmer was nicknamed “the architect,” told Stern he took with him essential parts of the Wikileaks platform software along with a sensitive trove of information because he did not feel Assange could protect it or its sources from potential harm.

But he rejected accusations of sabotage, calling his actions a “recovery of intellectual property.”

He also insisted he has no interest in using the information for his own purposes, but will only return it to Assange when Wikileaks can ensure it will be secure.

“Children shouldn’t play with guns,” wrote Domscheit-Berg in the book, portions of which were posted before publication on the website Cryptome.

“We just decided to take away these dangerous toys so that Julian could not do harm to anyone else. We were and are primarily bound to our duty vis-à-vis our sources’ security.”

That information does not include documents related to Bank of America, which Assange has announced will be the next big revelation from Wikileaks. According to Domscheit-Berg, the bank data are old and “completely unspectacular.”

In talking about his former boss, Domscheit-Berg describes a personality with very light and very dark sides. On the one hand, he calls Assange “freethinking,” “energetic” and “brilliant.” Yet, he is also “paranoid,” “power-obsessed” and “monomaniacal.”

“I’ve never experienced such an extreme personality before,” he said.

“Inside Wikileaks” talks about the many pseudonyms used by Assange, and that often Wikileaks employees were never sure whether they were communicating with a real person or yet another of Assange’s aliases.

Domscheit-Berg also disputed claims by Assange that the decryption of an infamous video showing air-to-ground strikes by US troops in Baghdad in July 2007 cost $50,000. Assange said he wanted to recoup that sum for the video, which showed the killing of at least 18 people, including two civilian reporters.

That was not true, Domscheit-Berg wrote, saying Assange’s only expenses were rent for his house in Iceland and his plane ticket.

Regarding his attitude toward women, Domscheit-Berg wrote that Assange had simple criteria, namely, that they be young, preferably under 22, that didn’t question what he said. He wrote that Assange often said: “She has to be aware of her role as a woman.”

His feelings of superiority appeared to extend to his entire circle. Domscheit-Berg wrote that discussions with Assange were often cut off with the statement: “Do not challenge leadership in times of crisis.”

Domscheit-Berg and other former Wikileaks colleagues have not followed that directive. After breaking with Assange, they decided to launch their own whistleblower site called OpenLeaks.

It is meant to be more neutral that the site that inspired it, not influenced by the personal politics or the preferences of its programmers. Domscheit-Berg also said he wanted to pull back the curtain of secrecy that Assange had drawn over Wikileaks.

At a gathering of the Chaos Computer Club, a hacker community in Berlin, Domscheit-Berg said those who want transparency should “stand in the sunlight ourselves and enjoy that we are creating a more transparent society, not create a transparent society while sneaking around in the shadows.”