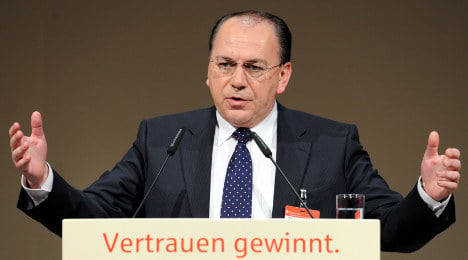 Weber had been tipped as one of the most likely successors to Frenchman Jean-Claude Trichet when he steps down in October.

But reports said Weber, who has irritated some European Union figures, was no longer “available” and that he would give up his Bundesbank position to join Deutsche Bank, Germany’s largest private bank.

The ECB succession comes at a crucial time for the 17-nation eurozone as it works to regain the confidence of financial markets owing to debt crises in two member states, Greece and Ireland.

The Bundesbank declined to comment, and said “rumours” that it would release a statement later on Wednesday on Weber’s future were untrue. Deutsche Bank also refused to comment.

Speculation swelled further when the spokesman for Chancellor Angela Merkel, Steffen Seibert, said she and Weber had “a telephone conversation” Wednesday morning, the subject of which was “confidential.”

A source close to the German central bank told news agency AFP Weber had just “signalled to those close to him that he would not necessarily seek a second mandate as head of the Bundesbank. “He sees no reason to express himself personally,” on the subject, the source said.

The reports sent the euro briefly lower against the dollar on Wednesday, and the Frankfurt stock exchange’s DAX index gave up early gains in midday trading.

Barclays Capital economist Julian Callow said that regardless of who was finally named to head the ECB, “we would not envisage a significant change in its strategy or reaction function.

“Indeed, the lesson of the ECB’s history so far is that while the personnel may change, the institution has stuck firmly to its clearly-defined mandate” of ensuring that eurozone inflation was held below but close to two percent.

Weber has rankled several EU chiefs, who are due to select the next ECB president in the coming months, with comments criticising the bank’s purchases of eurozone government debt.

In late October, the Bundesbank chief vowed to remain true to his principles even if it meant he were not chosen as the next head of the ECB.

“If that’s going to have implications for my future career, then I’d be happy to live with those consequences,” he told an event in Stuttgart, southwestern Germany.

Another name floated initially as a front-runner was that of Italian central bank chief Mario Draghi.

But a key factor weighing against Draghi is that the ECB vice president is Vitor Constancio of Portugal, another southern country. European institutions often strive for geographical balance among its senior positions.

Meanwhile, a poll commissioned by the Financial Times this month found that a German candidate would have more support across the continent than any other.

Callow said: “If Mr Weber were to resign from the Bundesbank to a new role, then in our view this would significantly elevate the chances of Mr Regling to succeed Mr Trichet as ECB president.”