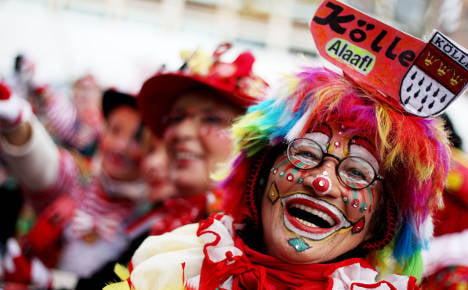 Driven out of Cologne after all these years? Photo: DPA

At 11 am every November 11, an army of clowns descends on Cologne’s Alter Markt, declaring the beginning of the city’s fifth season, Karneval, which is celebrated with songs, silly hats and dangerous amounts of beer until Ash Wednesday. Or, as more and more people are saying these days, it is grudgingly endured.

“The level of tolerance has gone down in Cologne,” Klaus-Dieter Bischof, the president of one of the city’s many Karneval associations, told the Süddeutsche Zeitung newspaper on Tuesday. “Resistance is growing.”

That resistance takes the form of increasingly frequent calls to the police complaining about the noise from Karneval celebrations, usually in small, neighbourhood bars.

Bischof recounted an incident several weeks ago during the annual Frühschoppen event, where club members gather for a morning beer, or two, or ten. Things were just getting rolling when he saw the black-jacketed members of the Ordnungsamt, or public order office, standing at the door, telling him the music was too loud.

“I mean, we only have a Frühschoppen one week out of 52,” he told the paper.

But Robert Kilp, the head of Cologne’s public order office, gets these kinds of noise complaint calls all the time during the silly season, and has no choice but to respond and demand that the party keep it down.

“Karneval isn’t accepted across the board like it used to be,” he told the Süddeutsche Zeitung. “The people of Cologne have changed.”

The newspaper said part of the blame for the new Puritanism might be apportioned to municipal policies, which have made noise public enemy number one. Police and public-order officers go on nightly “noise patrols” while during the 2010 World Cup, those buzzing vuvuzela horns were prohibited.

While the city’s new emphasis on peace and quiet impedes on Karneval fans’ love of losing all sense, most inhibitions, and often the contents of their stomachs, during the festival period, association president Bischof fears it points to something more serious – the loss of the tolerant, live-and-let-live attitude that Cologne is well known for.

“That’s not the case at all,” said Bischof, counting off a list of Karneval benefits, such as his association’s work with children’s groups, the donations collected for various charities, and the tolerance and joie de vivre that he says pervades the city during the entire season, reaching its climax during the week before Ash Wednesday.

If complaints continue about noise, and the small, neighbourhood bars that are the centre of Karneval culture are forced to radically reign in the merry-makers, Karneval will change, Bischof said, and Cologne will change with it.

If noise is frowned upon these days by Cologne residents and the city administration, there’s yet another elements of Karneval that looks endangered – smoking. Until now, lighting up in bars has been tolerated during Karneval for tradition’s sake. But North Rhine-Westphalia’s new health minister, Barbara Steffens, is not one to cling to tradition.

“Unfortunately, just wearing a fool’s cap won’t protect you from the dangers of tobacco smoke,” she told the paper.

Another blow against tolerance, or a step towards sanity? Whichever, many of those Karneval clowns soon might have a little less to smile about.

Karneval will run from March 3 – 9 this year.